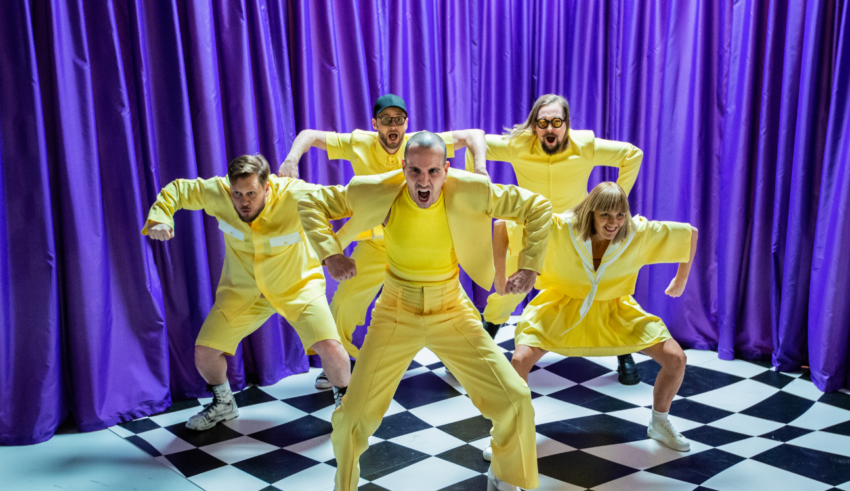 Today, we look at a band who have already taken their home country by storm, and are ready to conquer Europe and make us all dance in the next few weeks. Enter The Roop from Lithuania…

Who are The Roop?

Described by the band’s website as a “different kind of mainstream which is on fire!”, The Roop is a three-piece band consisting of vocalist Vaidotas Valiukevičius, drummer Robertas Baranauskas and guitarist Mantas Banišauskas, with their name coming from an old English word meaning “to cry out” or “to make a great noise”.

The band officially formed in the Lithuanian capital Vilnius in 2014, but the band members had already been hard at work in the studio and have worked together for roughly ten years, honing their dance-pop sound before releasing their debut album in 2015, writing over 50 songs in the process. The album, “To Whom It May Concern”, was released in November of that year but could only reach 78th on the Lithuanian album charts. The album featured production credits to Leon Zervos, who had worked with famous pop and rock bands like INXS, Coldplay, Aerosmith and Muse.

The Roop achieved more recognition with their sophomore effort, 2017’s “Ghosts”, which spawned the singles “Hello”, “Dream On” and the Lithuanian single “Keista Draugystė” and went to #34 in the Lithuanian album charts.

Since then, their journey has been closely linked with Eurovision, but the band have also made various live shows and appearances, including Positivus Festival in Latvia and the domestic festivals Granatos Live, Karklė and Galapagai. Describing their live performances which have gained the band wider recognition in the Baltics, the band’s website says “The Roop concerts are a mix of energy and feel (…)Live shows are lively, honest and have strong connections with the audience.”

How did The Roop get to Rotterdam?

The Roop’s Eurovision story began in 2018, when the band first appeared in the Lithuanian national selection for Eurovision, then known as the snappily titled “„Eurovizijos“ dainų konkurso nacionalinė atranka”. The group’s dreamy midtempo pop ballad “Yes, I Do” was first performed in the fourth show on 3rd February 2018, where the group qualified in fourth place overall but with strong public support.

The band then qualified from the semi-final stages on 24th February, finishing as the runner-up behind Jurgis Brūzga’s “4Love” but topping the semi-final televote. It wasn’t to be in the end for The Roop in 2018, but their national selection debut finished in a very respectable third place, below Jurgis and Lithuania’s eventual representative Ieva Zasimauskaitė.

The Roop took a year out from the competition, returning to the selection in 2020 when it was rebranded as “Pabandom iš naujo!” (Let’s try again!). The Roop’s latest entry, the charming and memorably alt-pop track “On Fire”, sailed through the heats, finished joint top of the semi-final and then won the selection outright.

In winning the 2020 contest, The Roop gained maximum jury votes and earned almost four times the amount of televotes as second place – such was the influx of Lithuanian phone votes for The Roop that TCG Telecom could not register enough of the votes in time to be considered in the show’s result. No need to worry though, as the band would only have their winning margin increased after the selection.

The Roop were installed as early favourites to win Eurovision 2020 and hype was high in Lithuania of the country’s strongest finish in the contest to date – but all hopes were dashed when the contest was cancelled on March 18th.

While many countries gave their winning artist the opportunity directly to return for Eurovision 2021, The Roop had to fight for their place once more, although Lithuanian broadcaster LRT awarded them a direct qualification to the “Pabandom iš naujo!” final for the 2021 edition. Despite speculation of a strong challenge from Gebrasy’s “Where’d You Wanna Go?” following his semi-final performance, The Roop once again smashed the televoting and jury votes to be picked for the second year running as Lithuania’s Eurovision entrants, with “Discoteque”.

How have The Roop been preparing for Eurovision since selection?

It’s safe to say The Roop have really captured the imagination of their home country, and much of their preparation has seen them endorse or join in with various motives and promotions in Lithuania.

The early reception to “Discoteque” was overwhelmingly positive; the song quickly racked up a million views for its energetic music video and went to the top of the Lithuanian streaming figures and charts. The back-up performance for the contest was filmed on March 6th at the Avia Solutions Group Arena in Vilnius.

On March 27th, the band won four MAMA awards (Lithuanian music association awards) for Breakthrough of the Year, Best Pop Act and Best Band, as well as Best Song for their 2020 entry “On Fire”. The band performed a medley of their two Eurovision entries at the award show in a new red ensemble.

In late March, it was reported that The Roop should be prioritised for COVID-19 vaccinations by the Lithuanian Ministry of Culture, such is the faith and hope that the Lithuanian people have in the band at this year’s contest! It was suggested that the government of Lithuania had already approved the request to be fulfilled along with vaccinations for key workers in the country, and it was down to the health ministry to complete the request.

On April 22nd, The Roop playfully posted on their Instagram that they were looking for a location for an “Open Discoteque”, after the city of Vilnius promised to host such an event in the Lithuanian capital if The Roop were to return to the country with the Eurovision trophy – once it is safe to do so, of course!

The group also performed as part of Eurovision Spain’s PreParty ES show on April 24th, and on the 28th the Lithuanian aviation company KlasJet filmed a promotional dance video to show their support for The Roop at Eurovision 2021.

Lithuania’s The Roop will open this year’s Eurovision Song Contest by performing “Discoteque” in the first semi-final of Eurovision 2021 on May 18th, performing as the first song of the evening.

What do #YOU think of Lithuania’s entry for 2021? Share your thoughts on this article in the comments below, on our forum HERE and on social media!