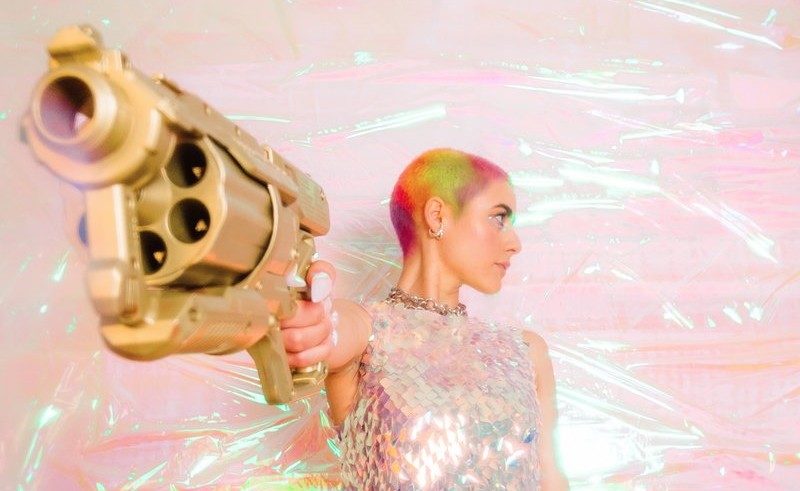 Next up, it’s Montaigne from Australia, whose meteoric rise in the indie and hyperpop scene down under has propelled her to Rotterdam 2021. Well, kind of…

Montaigne is the stage name of Australian art pop singer-songwriter Jessica Alyssa Cerro, who was born in Sydney on 14th August 1995. Jessica describes her ethnic background as a mixture of Argentinian, Spanish, Filipino and French and joins an already long line of representatives from multicultural backgrounds of the diverse country of Australia at Eurovision.

Montaigne’s rise to stardom is closely linked with the Australian indie and alternative radio station Triple J, famous worldwide for their Hottest 100 countdown each year. She was a Triple J Unearthed High School finalist in 2012 with her track “Anyone But Me” and moved into the music business full-time upon completing her studies in this year.

She signed a publishing deal in November 2012 with Albert Music, the label that holds AC/DC’s back catalogue and currently owned by the British label BMG (who will resurface in the UK’s profile later…). Here, she spent the next few years refining her technique and song-writing under the tutelage of Michael Szumowski, developing her penchant for “introspectively self-conscious” and developing “a more mature worldview”.

Settling on the stage name of Montaigne in 2013 after the famous philosopher Michel de Montaigne, her first two releases came in 2014; “I Am Not an End” and “I’m a Fantastic Wreck”, both of which featured on her debut EP “Life of Montaigne” in November of that year.

In 2015, Montaigne released “Clip My Wings”, a soaring indie pop song with a unique structure that preluded her debut album “Glorious Heights” in 2016, a release that was nominated for Triple J’s J Awards Album of the Year and favourably reviewed by Australian music press.

She also featured on “1955”, a collaboration with Adelaide hip hop group Hilltop Hoods and Tom Thum, which was ranked at #4 in Triple J’s Hottest 100 of 2016, peaked at #2 in the Australian charts, went 8x platinum and gained over 23 million views on YouTube. Montaigne capped off a whirlwind rise in 2016 by winning the ARIA Award for Breakthrough Artist Release for her debut album.

Montaigne’s second album “Complex” released in August 2019 and was supported by a 13-date live tour in November of that year.

How did Montaigne get to Rotterdam?

Of course, Montaigne sadly won’t be present with the rest of the artists in Rotterdam, but her successes and journey to joining the Eurovision alumni is certainly worth celebrating.

A month after her tour to support “Complex”, Australia’s broadcaster for the Eurovision Song Contest, SBS, confirmed that Montaigne would be among the ten acts vying for victory in their national final for the contest, “Australia Decides”. Competing alongside other established Australian acts like Vanessa Amorosi, iOTA and Mitch Tambo, Montaigne’s entry “Don’t Break Me” won the competition; she finished top of the jury voting and second in the televoting behind Casey Donovan’s “Proud”.

Sadly, a trip to Europe to perform the song in Rotterdam would not materialise in 2020 with the cancellation of the contest, with Montaigne posting on social media to convey her feelings the day after the contest was pulled; “I’ve had my cry. I spent a couple of hours paralysed in bed, despondently scrolling through the many lovely tweet mentions from people expressing their love and support. [However it is] the most responsible and ethical decision that the EBU could have made.”

On 2nd April 2020, SBS confirmed that Montaigne would retain her selection as the Australian artist in the 2021 contest, cancelling “Australia Decides” in the process. Montaigne teased a unique new entry for this year’s contest back in November called “JC Ultra”, a reference to the MK Ultra experiments undertaken by the US CIA in the 50s and 60s. While she told fans on social media “i reckon i’ve written my eurovision song for next year it’s totally f****d, lets see what mgmt says (sic)”, this song was ultimately shelved as the 2021 entry.

Her new entry, a hyperpop female empowerment anthem called “Technicolour” was eventually revealed on 5th March 2021. Speaking about the entry, Montaigne remarked “I think it does it all – makes you want to cry, makes you want to dance, makes you want to take on a malignant corporate power – and I think that it is both forward-thinking and suitable for Eurovision.”

How has Montaigne been preparing for Eurovision since selection?

Ahead of her preparations for Eurovision, Montaigne featured on Happy Mag TV’s YouTube channel, creating a sound sample pack from skate park sounds, and then on March 17th was commissioned to write and perform a theme song for the popular Australian podcast “My Brother, My Brother and Me”.

On April 20th, sad news emerged from the Australian delegation, as it was confirmed that they would not be able to travel to Rotterdam for the contest due to the current travel restrictions outlined by the Australian government. As a result, Montaigne will perform remotely using her “live on-tape” performance and will be the first ever Eurovision artist not to perform live at the contest during the competition.

Four days later, Montaigne did make an appearance as part of Eurovision Spain’s online PreParty ES, performing her entry from her bedroom in Australia. “Technicolour” passed 1 million streams on the 27th.

Australia’s Montaigne will perform “Technicolour” in the first semi-final of Eurovision 2021 on May 18th, performing remotely from Australia as the fifth song of the evening.

What do #YOU think of Australia’s entry for 2021? Share your thoughts on this article in the comments below, on our forum HERE and on social media!