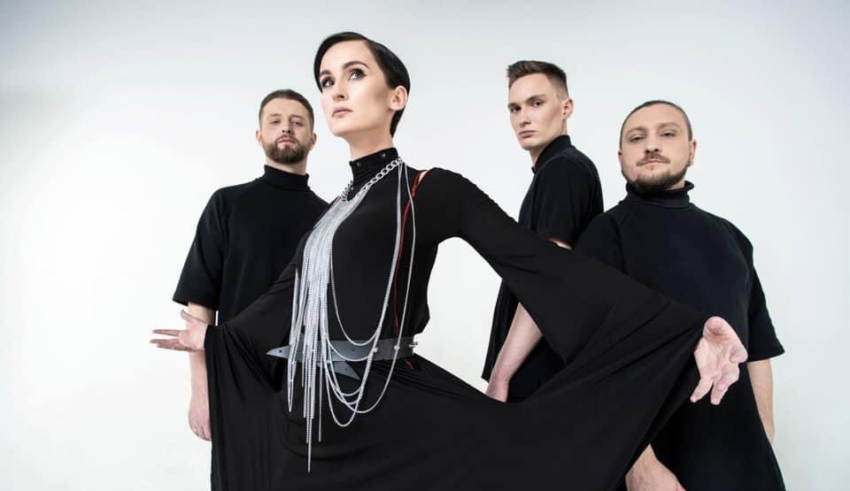 Today we take a look at the Ukrainian group Go_A, whose unique mix of electronics and ethno-folklore has enamoured themselves with fans both in and out of their home country.

Go_A is the brainchild of multi-instrumentalist Taras Shevchenko, who had a vision to form a band that combined modern electronic music with Ukrainian ethno as early as 2011. Initially,Shevchenko found it difficult to find like-minded musicians to join in with his vision.

A year later, the electro-folk project Go_A was born, with Shevchenko going through a number of line-up changes before the group eventually settled on the current line-up. Taras is joined in the band by vocalist and specialist of “white voice” Kateryna Pavlenko, traditional instrumentalist and sopilka flautist Ihor Didenchuk, and guitarist Ivan Hrihoryak.

Go_A – whose name was chosen to signify returning to your roots – debuted in late 2012 with their song “Kolyada”, a thumping electronic Christmas carol. In an interview with Vezha, Taras noted that the group quickly found their greatest impact to be at open air performances, and steadily amassed a catalogue of performances across Ukraine, including appearances at Koktebel Jazz Festival, Gogolfest, Trypilske Kolo, Kyiv Open Air and Dreamland Kyiv.

Go_A begun to gain traction in 2015 when their track “Vesnyanka” was named track of the year by Ukrainian dance station Kiss FM and was placed on heavy rotation by the radio network. In 2016 the group released their debut album, “#IdyNaZvuk”, and also performed at both Ukraine Fashion Week and the beauty contest Queen of Ukraine that year. They released a Christmas single, “Shchedryi vechir” in 2017 with fellow Vidbir alumnus Katya Chilly and continued to release singles up until their Vidbir participation.

How did Go_A get to Rotterdam?

Like all other aspiring Eurovision artists in Ukraine, Go_A entered the national selection Vidbir in 2020 and were one of the sixteen acts selected in the competition, as announced on 20th January 2020.

The group competed in the show’s first semi-final with “Solovey”, co-written by Taras Shevchenko and Kateryna Pavlenko. The song qualified from the semi-final in second place, behind Krutь’s “99”, but ended up sweeping both the jury and televote in the Vidbir final on 22nd February and was selected to represent Ukraine in Rotterdam. Go_A’s selection also marked the first instance of Ukraine sending an entry entirely in its native language.

Of course, it wasn’t to be last year, but Eurovision 2020’s cancellation on March 18th coincided with the Ukrainian broadcaster UA:PBC giving Go_A their blessing as the Ukrainian artist for 2021.

Rumours were abound that Ukraine would once again be holding a national selection for the song that Go_A would sing in Rotterdam, with three candidate songs eventually revealed by the broadcaster; “Rano”, “Tserkovka” and “Shum”, a previously released 4-minute track that had been debuted by the band on YouTube on 22nd January. A jury consisting of Jamala, The Maneken, Ruslan Kvinta and two members of the UA:PBC management board, with input from the general public, selected “Shum” as the Ukrainian entry for Eurovision 2021 following a positive reception to the track.

How have Go_A been preparing for Eurovision since selection?

Their chosen entry “Shum” was not eligible in its previous form for Eurovision, given that it exceeded the three minute limitation on songs in the contest and also borrowed its lyrics heavily from an existing traditional folk song.

As a result, Go_A went to work on a Eurovision-eligible version of the track with new lyrics, which was debuted on 9th March with a new music video. The video, directed by Maksym Tuzhylin who had won the tender with his Chernobyl-based idea, debuted that night on the official Eurovision YouTube channel.

With the revamp unveiled, the group’s preparations for Rotterdam were well underway. They appeared on Ukrainian morning TV to perform the track on March 16th, and UA:PBC launched a vlog series called “HALLO, Yevrobachennya!” (Hello, Eurovision!) which would follow the band’s preparations for the competition. So far, four episodes have been released with English subtitling available (the first episode is below!)

The group will perform in the online PreParty ES, organised by Eurovision Spain, on 24th April 2021.

Ukraine’s Go_A will perform “Shum” in the first semi-final of Eurovision 2021 on May 18th, performing fifteenth on the night.

What do #YOU think of Ukraine’s entry for 2021? Share your thoughts on this article in the comments below, on our forum HERE and on social media!