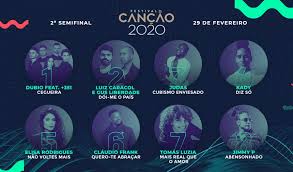 Tonight, Portugal concluded it’s search for a star for Rotterdam as the final of Festival da Canção 2020 took place in Elvas in eastern Portugal.

The competition’s final was hosted by Eurovision 2018 host Filomena Cautela and Vasco Palmeirim at the Coliseu Comendador Rondão Almeida.

After two weeks of qualification rounds, eight acts were selected to battle it out for the Portuguese ticket to Rotterdam in May. These eight acts were;

A combination of jury and televoting was used to compile the points and confirm the result. In the end, it was Elisa who won this year’s edition of Festival da Canção and will go on to represent Portugal in Rotterdam!

Portugal will be hoping to reach the highs of 2017 once again in Rotterdam; after exceeding all expectation and gaining the Eurovision points record to win in Kyiv, the Iberian nation has since finished last as the host nation in 2018 and failed to qualify from last year’s semi-final stage in Tel Aviv.

What do #YOU think of Portugal’s choice for Rotterdam? Share your thoughts with us on our forum HERE or join the discussion below and on social media!