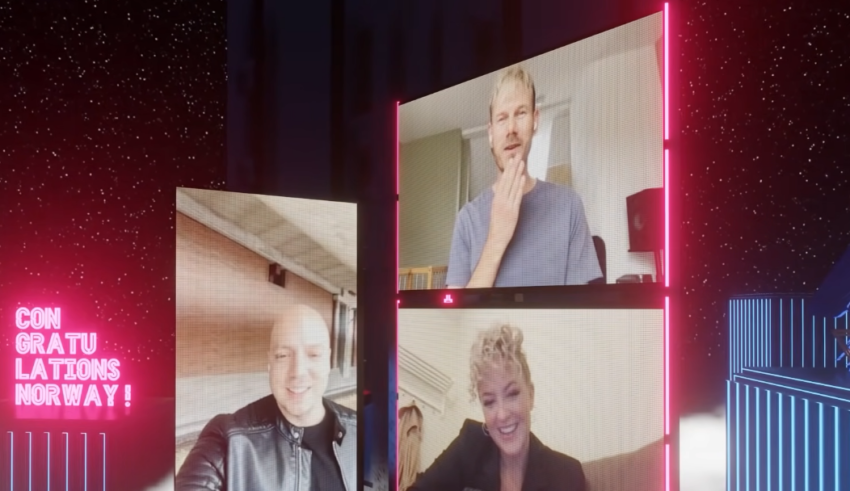 The members of Keiino, calling in to celebrate their OGAE Second Chance victory.

Keiino may not have won a ticket to Rotterdam this year, but they continue to win the hearts of Eurovision fans.

The Norwegian trio’s song ‘Monument’, the runner up in the 2021 Norwegian national final, won this year’s OGAE Second Chance Contest with 441 points. This is an all-time high score for a winner of the contest, besting the previous record holder (Annalisa’s ‘Il mondo prima di te’ for Italy in 2018) by over 90 points. The second place finisher, Eric Saade of Sweden with ‘Every Minute’, received 353 points.

There was little suspense in this year’s winner reveal, with Keiino receiving the maximum 12 points from the overwhelming majority of OGAE clubs. Keiino called in over video to accept their win and thank the fans for their support.

“For us, the most important thing is to be recognized by the Eurovision fans,” said Tom Hugo. “This really warms our hearts.” He also teased two new singles the group will be releasing in October.

“This is such a confidence boost for the show I am going through now,” added Alexandra Rotan. She is currently competing on the 10th season of Stjernekamp, a Norwegian singing competition show for already-established performers.

The broadcast opened with an acoustic performance of ‘Kingdom Come’ by Anna Bergendahl, the winner of the previous year’s contest. She also announced OGAE Sweden’s 12 points to Norway during the voting reveal.

“I felt really humbled,” Bergendahl said in a brief interview at the beginning of the show. “To me, Eurovision fans are the most devoted fans in the world, and wherever I go, they always make me feel like a queen.”

Bergendahl recently released a new single, “Grain of Trust”, and is preparing for her upcoming Swedish tour.

The OGAE Second Chance Contest was founded in 1987. This year, fourteen chapters of OGAE, the international Eurovision Song Contest fan club, submitted a song that failed to win at their country’s 2021 national final. Voting by the 41 participating OGAE clubs then determined the winner.

You can watch the entire stream of the broadcast here:

Who were #YOU rooting for at this year’s OGAE Second Chance Contest? Were #YOU surprised that Keiino smashed the record for most points given to a winner? Sound off in the comments below, in our forum, or on social media @ESCUnited.