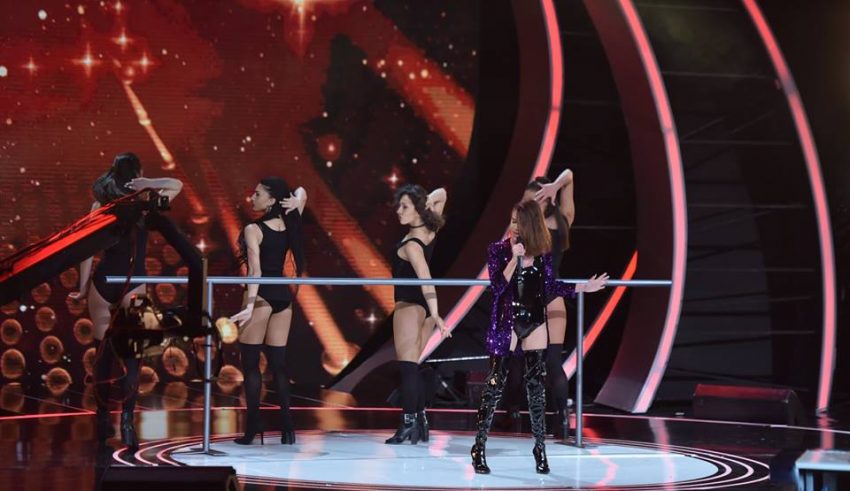 Lisa Kalandadze has once again wowed the judges and the televoters with her performances and is in prime position going into the final, with her and Oto Nemsadze firmly in the running to take the Georgian Idol crown next week and represent the Caucasian nation at Eurovision 2019 is Tel Aviv, Israel.

Nini Tsnobiladze struggled with Beth Hart’s “Am I the One?,” and was subsequently sent home despite amassing quite a following for some great performances over the week and her eye for pairing costume to song.

The Georgian Idol Semi-Final required each of the remaining five contestants to sing two songs each. The first theme was classic compositions, with mostly English language pop and jazz numbers that could be performed by an orchestra.

Oto Nemsadze – “Come Together”– (Originally by The Beatles)

Nini Tsnobiladze – “Am I The One?” – (Originally by Beth Hart)

Giorgi Nakashidze – “Sweet Dreams (Are Made of This)” – (Originally by Eurythmics)

Nakashidze struggled with his English, though the orchestral interpretation straddled both the original art pop version and Marilyn Manson’s alternative metal 1996 version, with Nakashidze letting out a loud primal scream at the end in a dance routine finale that saw his dancers piled around him and pull him down.

For the second round of songs, the theme switched to modern Georgian pop. Given the struggles a couple of the contestants have had with English (particularly Tsnobiladze and Nakashidze) in this round, it is perhaps for the best that it was announced this week that the Georgian entry for Eurovision 2019 will be in Georgian. After years of struggles with English, and with Georgian Public Broadcasting (GPB) finding the Georgian language song entries this year to be strongest, the decision was made to go with Georgian regardless of who won Georgian Idol.

After four weeks of live shows, with contestants performing Georgian classic jazz compositions, Georgian adult contemporary, and the work of Georgian legend Irakli Charkviani, it seemed highly likely they were teeing up the eventual winner for a Georgian song even before the GPB’s announcement earlier this week.

Nini Tsnobiladze – “You are not with me” – (Originally by Goofy Land)

Oto Nemsadze – “Those who love this country reign”

This week in Nini Tsnobiladze fashion watch, she did not go too far out, probably because of the need to do two performances. Her first (see featured image) was a sequined jacket over a black vinyl swim suit with thigh high vinyl boots, and her second was a lavender pant suit with a white sports bra on underneath. Perhaps Sporty Hillary will become a new trend in Georgia?

The mantle of Georgian Idol underdog now goes to frequent outsider Giorgi Pruidze, and he admitted as much in an interview this week with Prime Time Georgia.

“I do not have much hope to win,” said Pruidze. “I was very excited by the first round, but I expected to leave then. I can’t even imagine getting to the final. I didn’t even imagine I would get to this stage of the contest. But it is a great achievement and gives me real happiness to accompany such people on a big stage.”

The GPB opted to use the Georgian Idol format to find their next singer after two years of internal selection resulted in non-qualification from the semi-finals at Eurovision 2017 and Eurovision 2018. Additionally, the song entry will be selected separately, with submissions to be incorporated into the later rounds of the show. The CPB’s call for the public to submit their entry closed on February 1, 2019.

Tune in Saturday night on March 2, 2019 at 22:00 Georgian time to watch the Final. Georgian Idol is streamed live on their facebook page.

Do #YOU think GPB is right to submit an entry in Georgian? Are there any stand out performers for #YOU so far? Comment below, in our forums, or on social media.