Home 2019 Marching on to Eurovision 1965: Legendary songwriter Les Reed passes away at age 83 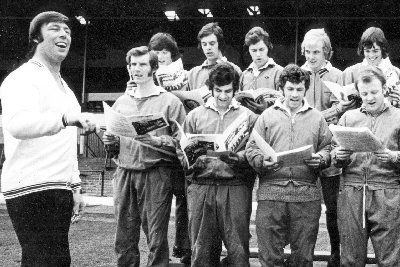 Famous songwriter Les Reed, behind some of the biggest hits in the United Kingdom of the 1960s and 1970s, passed away today at age 83. Les Reed, alongside his writing partner Barry Mason, also wrote a song for Kathy Kirby as an entry for A Song for Europe 1965. As we send our thoughts and prayers to Reed’s family and friends, we take a look back to A Song for Europe 1965 as Reed and Mason, then two up-and-comer British songwriters, try to craft a ballad for the United Kingdom’s contestant Kathy Kirby.

Love them or loathe them, no team in English football is as divisive as Leeds United. Whether considered a passionate clarion call for the faithful or a din from zealous hooligans, divisive is also the opinion of the club’s 1972 Top Ten hit “Marching On Together” (familiar for the “Leeds! Leeds! Leeds!” chants throughout) written for the 1972 F.A. Cup, which Don Revie’s all-conquering side won 1 – 0 against Arsenal. And as every visitor to Elland Road today can attest, it is sung proudly and loudly by every home fan before kick-off and just before the second half.

And “Marching on Together” was written by two established British songwriters whose very first collaboration was a song that was nearly considered for Kathy Kirby to perform at the 1965 Eurovision Song Contest, and who went on to pen some of the 1960s most memorable charting pop singles: Les Reed and Barry Mason.

In nine years prior, the United Kingdom had already placed second four times, and in 1965, the BBC internally selected Kathy Kirby, an established singer in the UK who had already had several chart-topping hits since 1960, including her version of the Doris Day classic “Secret Love,” which featured Led Zeppelin guitarist Jimmy Page. However, the BBC chose to hold a televised vote for one of six songs for Kirby to perform at the finals, on January 29, 1965.

At this point, Les Reed was an accomplished musician and writer, having performed piano with The John Barry Orchestra, including on the original version of the James Bond theme in 1962. Originally a jazz musician, Reed was reluctant to move into pop music, but instinctively knew he would have to broaden his horizons if he was to continue as a performer and achieve his goal of writing his own music. As he told The Telegraph in 2012, “I hated rock and roll at first, I thought it was so basic. But working with some of the big artists of the time, I started to see the power of simplicity, and what it meant to people. And I thought if you don’t have all that rhythm going on, you could hear the strings and horns and choirs and bring forth all the secondary melodies. You could get into people’s souls. I decided to write songs so simple it was almost embarrassing.”

Barry Mason had a career as a singer and an actor, working stages in Blackpool, Hollywood and ultimately being understudy to Albert Finney at the Royal Court Theatre, which resulted in a small role in the hit Finney film “Saturday Night and Sunday Morning.” After this stint, Mason got into talent management and provided his services as a lyricist for a series of minor hits. And towards the end of 1964, Mason came to the attention of Reed, and they began what would turn out to be one of the UK’s most prolific and successful songwriting duos of the ‘60s and ‘70s.

“I’ll Try Not to Cry” garnered 96,252 votes, not enough to beat the more low key, though more thematically upbeat ballad “I Belong” and its 110,945 votes. The writer of “I Belong” would himself go on to have a career of note – “I Belong” was written by Peter Lee Stirling, who would later go on to write and record the Billboard Hot 100 charting “Beautiful Sunday” in 1972 under the name Daniel Boone.

At the end of the night, “I Belong” earned the United Kingdom another 2nd place, its fifth. “I Belong” was fairly representative of the pop ballads at the time, but in both Eurovision and the UK Singles Chart, it got lost among newer and fresher material. “I’ll Try Not to Cry” would probably not have fared better, even though Kathy Kirby’s being 27 and reminiscent of Marilyn Monroe largely made her immune to the critique leveled by Gainsbourg and Gall. She could get away with acting mature in the face of romantic adversity, regardless of the more triumphant “I Belong” or the more despondent “I’ll Try Not to Cry.” The performer was not the problem: the song choice was when a wave of modernity hit the Eurovision Song Contest.

And being older style songwriters in the UK, it was only a matter of time before their paths crossed Engelbert Humperdinck’s (himself a Eurovision entrant in 2012 with the Sacha Skarbek penned “Love will set you free”) – in 1967, Reed and Mason wrote an easy listening ballad that remains one of Humperdinck’s biggest hits, “The Last Waltz.” More hits followed, including a few early ‘70s Elvis Presley songs, The Dave Clark Five, Connor Francis, and Des O’Connor, with “Marching on Together” capping off a fine decade of hit-making work before Reed moved on to film score composition and stage musical productions.

So the next time Leeds United come to your town, instead of heckling them about how Ezgjan Alioski doesn’t seem to know what the offside rule is and the usual about them being a rum bunch of thugs, rest-assured you can build a bridge on the knowledge that A Song for Europe 1965 kicked off the careers of the guys who wrote their beloved anthem.