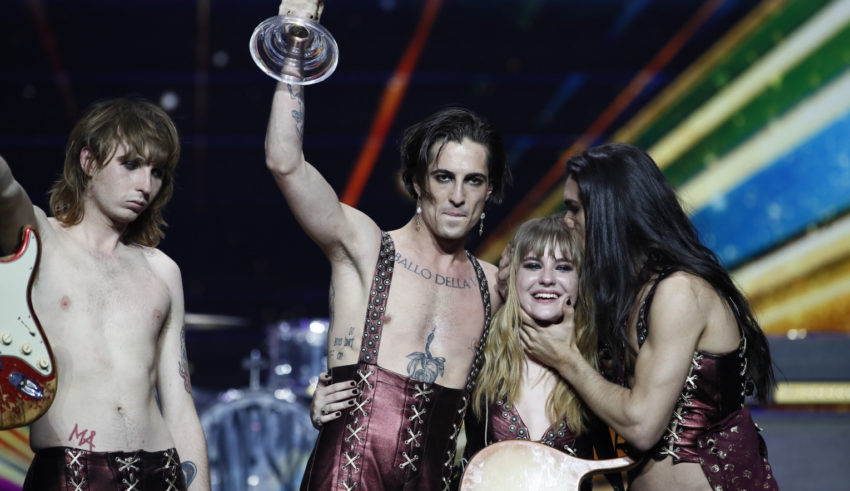 There seems to be no end in sight for Måneskin world domination, as the Eurovision winners have scored not one, but two top ten singles in the UK charts this week.

Fan favourite I Wanna Be Your Slave has climbed to position 6 in the UK Official Singles Chart, while Måneskin’s cover of Beggin’, which was released in 2017, has entered the chart at number 10 after it went viral on Tik Tok. By having two simultaneous entries in the UK singles chart, Måneskin have smashed a record by being the first Italian artists to do so. Earlier, Eurovision winning song Zitti e Buoni peaked at position in 17 in the same chart, giving the Italian rockstars three top 20 singles in the space of a month.

I Wanna Be Your Slave is also currently number one on Billboard’s Hot Hard Rock songs chart, having received 2.3 million U.S. streams in the week ending June 17th, while the song is 21st on the Billboard Global 200 Chart. Other recent successes include Beggin’ being on top of the German and Czech charts, while I Wanna Be Your Slave has received gold certification in Ireland, Poland and Turkey.

Måneskin are currently on a promotional tour through Europe, where they have visited Berlin, Amsterdam, Gothenburg, Copenhagen, Paris and Warsaw so far. Only yesterday, tickets to a Måneskin concert in Belgium in August sold out in less than one minute.

Måneskin represented Italy at the Eurovision Song Contest in 2021 with the song Zitti e Buoni, placing first in the Grand Final with 524 points.

Are #YOU excited to see more Måneskin songs entering the charts worldwide? Share your thoughts with us in the comments, on our forum HERE or on social media!

David Tserunyan, the Armenian Head of Delegation for Eurovision, has hinted at a possible …