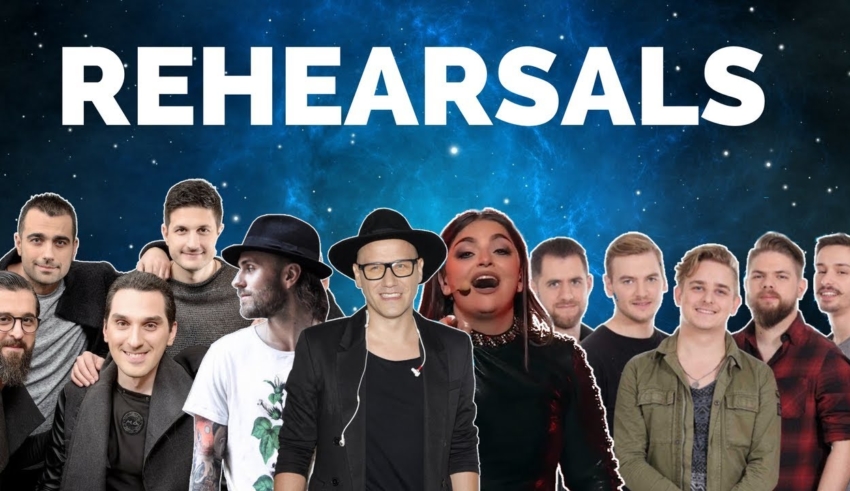 Did #YOU miss out on this morning’s rehearsals and live stream? Well, fear not! We have #YOU covered with our reviews, so take a look at how Georgia, Poland, Malta and Hungary got on with today’s first batch of rehearsals below! “Music is not fireworks, it is feeling”. The words of Salvador Sobral still ring in Georgian ears and this year they’ve stripped it back to the bare bones with the ethno-jazz band Iriao. The three main performersare flanked by the band’s keyboardist and guitarist in a very simple staging, as the backdrop moves through from blue to red and gold lighting as the song builds. The trio are vocally sound an bring across a magical feel to the performance. In the final run through the stage is coated in fog (Nina Sublatti style) which really adds to the mystique of this rehearsal, and the last note is greeted with a spark shower and applause in the press centre. Could this sneak into the final? They’ve certainly given all they have! Now here’s a rehearsal that looks a little lacklustre without a studio audience! The camera angles need work but this will be a popular one in the Altice Arena with a big reaction. The duo wear black leather jackets with the trademark cowboy-style hats that we have all become familiar with. The stage is lit in purple and blue lighting with fireworks pumping out of the stage at the drops. It’s quite a hard song to visualise in this setting but they do well to keep up tne energy, although there are a few lingering camera shots of Gromee waving his hands that you can see are even too long for him. A lot of work needed with the cameras. Malta bring the first LED screens of the year with a quartet of tall screens showing red, white and black static interspersed with visions of writhing people, lions, breaking glass etc. at various points throughout the song. Christabelle is wearing the same black dress from the national final, and is joined on stage by a dancer wearing a pink costume. At the second chorus the stage explodes into a quick flash of colour, and lasers adorn the Altice Arena. I can see this one being a bit hit with the audience, and Christabelle’s vocals performed with each performance. Malta are looking good to grab one of the ten spots. For those about to rock, we salute you! We don’t need to report any major changes for you but the band are rocking out in the arena and use the stage to full effect. The performance begins with the now-traditional blue lighting before changing to gold and fiery colours during the choruses. Lead singer Örs Siklósi puts his everything into each performance and the guitarist crowdsurfs during the breakdown, but they need to make sure to capture this on camera. It’s a very effective performance and I’m pleased with how well-received this song has been with the Eurovision crowd so I’m sure this will go big live.