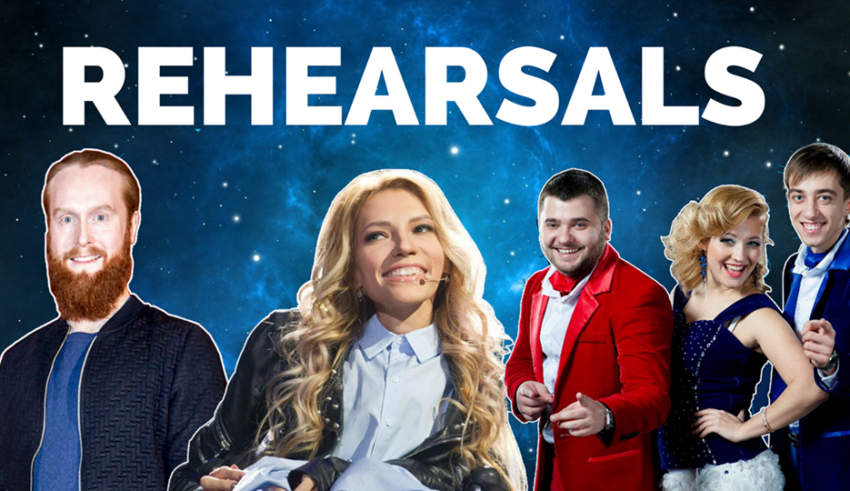 The second batch of rehearsals today certainly saw some big performances as Denmark, Russia and Moldova took to the stage! If #YOU missed out on the live stream from earlier, this can be found below, but we have also provided some short reviews below! If you’ve watched the performance from the Danish selection, then I don’t really need to explain this to you, but it’s already a very effective staging. The dark blue staging explodes into white light at the beginnings of the choruses and the performance is powerful and mystical as expected. The end of the song sees snow fall which is a very effective addition. Rasmussen’s vocals are on point and handles the staging professionally, although there is a funny moment when he recoils as some ‘snow’ gets in his eye! As many have predicted it is a mountainous performance for Yulia Samoylova! She is perched on top of a large mountain which has projections across it, with three backing singers to the stage left in white, and two interpretive dancers in front of Yulia’s mountain. The camera angles take a few tries to get correct, but towards the end the performance looks a little more polished. Her vocals and synergy with the backing vocalists has improved since the performance in Moscow but there are still a few iffy moments. Wow, wow, wow! Moldova bring the house down in the press centre with a very creative and innovative performance using a structure of doors and windows. The three performers are dressed in bright clothing reflecting the Moldovan flag colours; Sergiu in a blue suit, Marina in a yellow dress and Eugeniu in a red suit. They appear and dissapear through the doors with expressive, comic faces as they try to seek out each other. At points throughout the song the windows open with doppelganger backing dancers acting out some innuendo moments and mirroring DoReDos. Altogether it’s a fantastically fun performance and, some iffy vocal mixing forgiven, has put Moldova in the frame for a solid position in this semi-final!

We will be back later with more reviews, as the Netherlands and Australia have their first performances!

What do #YOU think of today’s rehearsals so far? Share your thoughts with us on our forum HERE or join the discussion below and on social media!