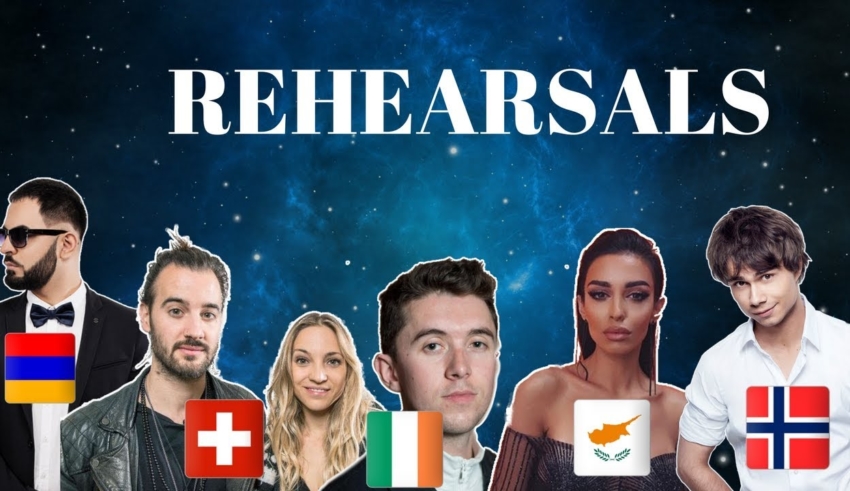 This morning saw the last four entries from semi-final 1 rehearse once more and also Norway’s second rehearsal. Did #YOU miss any of this morning’s rehearsals? You have nothing to fear, as we are here to remind and reward you with the information on each rehearsal. Check out our archived live stream below as well as the EBU’s exclusive rehearsal clips. Armenia kick off today’s rehearsals with a strong performance of Qami. Sevak’s vocals are as ever on point and he is surrounded by the circle of plinths that I’m sure you have already seen, with. Today’s rehearsal sees the Armenian delegation add mystique to the show with the addition of dry ice and fog that coats the floor of the stage and is delicately kicked up by the wind machine. It makes the performance look a lot more dramatic and it is these dramatic points that Armenia will need to rely on to make it to the final. Switzerland’s angst and energy is palpable once again in this fiery performance of the brother and sister duo. The stage is still lit in red and white and Corinne Gfeller’s raspy vocals are in full flow again today. In the last run the siblings grab and let off flares, but it would be a stronger look if they had smoke-bombs or something similar. Switzerland are certainly showing their teeth a little more with this song than in previous years but whether this will be the first Swiss finalist in 4 years is up in the air. Ryan O’Shaughnessy’s performance has lost some of the nonchalant swagger that I liked in his first rehearsal but the camerawork is much stronger this time. The lighting is a lot darker this time as Ireland aim to bring the streets of Dublin to the stage of Lisbon. The snow really does make this entry and it now falls as the ‘couple’ sit on the bench together which adds to the romantic edge of this song. While I do worry for this song’s chances as a stand out of this semi-final, the performance has certainly helped their chances. What a performer Eleni is! She has the fiery passion burning deep inside her and she is like a woman possessed on the Eurovision stage this year! Having seen this both on stage and on screen there is a real drive and passion to this performance that will be infectious for the audience, and it is an effective closer for the first semi-final. Hair flipping, grinding, pyros and a lot of flashy lights and colours make for a classic performance and this should surely be making it through to the final.

NORWAY – Alexander Rybak – That’s How You Write a Song If ever there was anyone who could convert the uninitiated it would be Norway’s Alexander Rybak this year! While the song might not be everybody’s cup of tea there’s no denying that the Eurovision 2009 champion is a charmer and this will really come across on screen in this performance. The graphics are all there and having also watched this in the arena, even from the back you can feel the personality in this performance! I’m starting to think that maybe, just maybe, Rybak could do very well here…