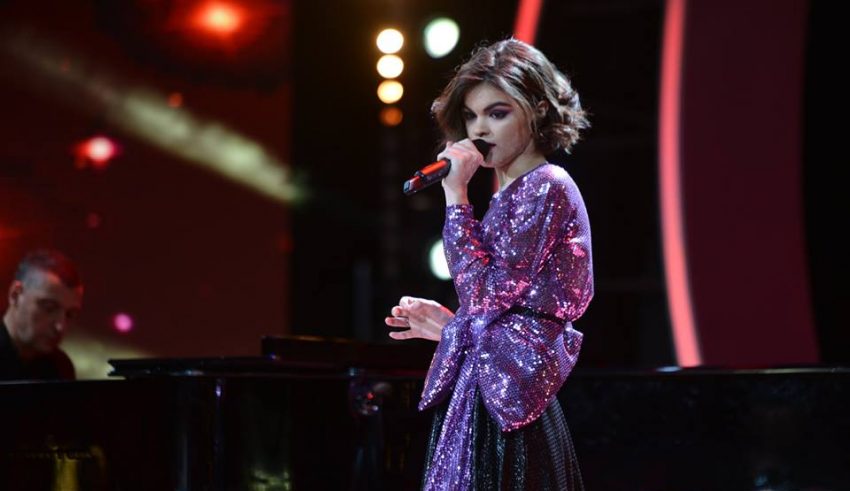 Six became five as 17-year-old Tamar Lachkepiani was eliminated from the fourth live show of Georgian Idol. Nine out of the Idol ten contestants had some prior experience in a talent show, whether in Georgia or Ukraine. Lachkepiani was the only one who’d never been on television, but she departed today as the contest to be Georgia’s representative at Eurovision 2019 in Tel Aviv, Israel heated up.

Speaking of Todua, the fourth live show began with a poignant moment of Todua meeting her grandparents on Enguri Bridge that separates Georgia from Russian-occupied Abhkazia, a reminder that in a contest that is meant to bring people together, there are still stark everyday reminders of the conflicts that dominate the continent.

Today in Nini Tsnobiladze Fashion Watch, she wore a green velvet kimono with orange feather trim. It’s little fashion touches like this that tie to the song that keep her in the contest, despite being an underdog vocals wise.

The GPB opted to use the Georgian Idol format to find their next singer after two years of internal selection resulted in non-qualification from the semi-finals at Eurovision 2017 and Eurovision 2018. Additionally, the song entry will be selected separately, with submissions to be incorporated into the later rounds of the show. The CPB’s call for the public to submit their entry closed on February 1, 2019.

Tune in every Saturday night at 22:00 Georgian time to follow Georgian Idol until the finale on March 2, 2019. Georgian Idol is streamed live on their facebook page.