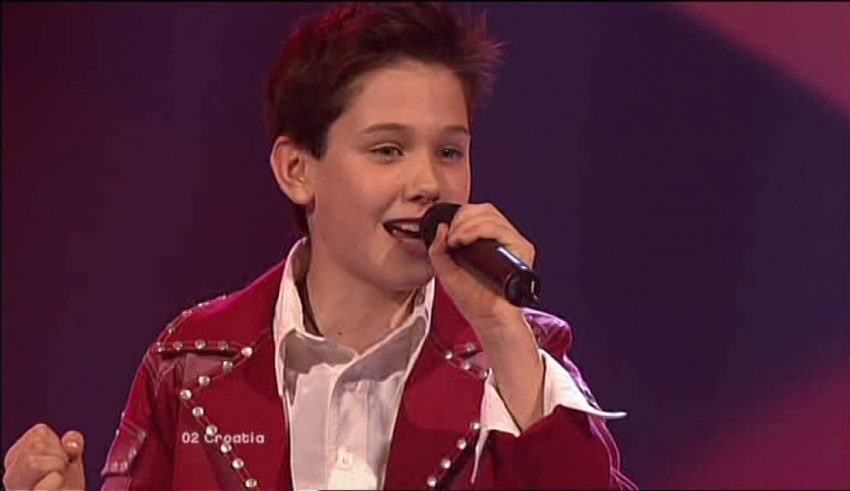 With the Junior Eurovision Song Contest 2018 taking place this weekend, our editorialist James Maude takes an in-depth look at the impact winning the contest can have on a young performer’s career. What ever happened to Croatia’s inaugural winner Dino Jelusić? The opinions expressed in the article are those of the author and do not necessarily represent those of escYOUnited, its members or the EBU as a whole.

As the nights get longer, the air gets colder, and the kids get ready to belt out songs for country and/or Christ, we remember the very first as we ramp up to the 2018 Junior Eurovision Song Contest and celebrate the first winner’s extensive career as he leads revellers in song this Christmas time.

Born in Pozega, Croatia, on June 4, 1992, Dino Jelusić began performing on stage at 5 years of age, winning contests in Egypt and Croatia before he was entered in the very first Junior Eurovision Song Contest, held in Copenhagen, Denmark on November 15, 2003. Apologies for his biography being this brief before we get to the main event, but being Junior Eurovision, a contest for performers aged 8 to 15, even a biography for a veteran performer at this point such as Dino will be brief.

The first Junior Eurovision came about in response to several national children’s contests held in Denmark, Sweden, and Norway. In 2002, all three banded together and open the junior song contest to children from all three, called Melodi Grand Prix Nordic. Its success led the European Broadcasting Union to expand even further, and for 2003, 16 EBU members entered, with one major difference from the adult version: Though the option to host was available for the winner, in order to attract entrants this was no longer a requirement. Though Croatia won in 2003, Norway hosted in 2004. Otherwise, it was a junior sized version of the contest the adults enjoy, complete with their own national qualifying contests and selection dramas.

Another diversion from the adult version: the entrant who performed 2nd in 2003 broke the longstanding duck where no-one who performed 2nd had won before! And it was a young lad with a cocky swagger and assured presence who eked it out over Spain’s Sergio and the United Kingdom’s Tom Morley. Donning a red leather coat, jeans and pumping his fists, it is no surprise that Dino’s career went down the hard rock path, even though “Ti si moja prva ljubav” sounds more Philipp Kirkorov than Phil Lynott. And on that stage in Copenhagen his star shone, blowing all competitors out the water, even if the moment where he spins with the microphone stand would illicit eyeball rolling if an adult did it. The top three were close (134 points to Sergio’s 125 and Tom Morley’s 118), but compared to their more restrained, more orthodox performances, Dino stood out.

Since his win, his career has slowly but surely taken off, with a few disappointments and instances of bad luck along the way. After many more concert and festival appearances, and a 2004 album to capitalize on his Junior Eurovision win, and presumably graduating high school, Dino recorded and released his debut rock album “Living my own life” in 2011. Though the overall impression of the album is one of a demo of a young singer trying to forge his own path and develop his voice rather than a coherent and organized collection, there are moments where the green shoots of a rock identity begin to sprout.

The highlight of this year is a single released separately, and included on the later concept album “Pro ao sam sve,” a haunting rock ballad titled “I survived it all,” a powerful almost 7 minute song (in English) about the daily horror and brutality of the Croatian war through the eyes of a child, based on the war diary of Marijan Gubina.

A move to South Africa followed in 2012, where Dino, thanks to this album and supporting live performances, was hired to perform in Synkropation, a collaboration with legendary kwaito artist Mandoza, rock singer Dilana (of “Rock Star: Supernova” fame), and others. The project ultimately was never finished as Mandoza succumbed to pharyngeal cancer, though some tracks were released, including “Rhino in Our Blood,” a rap-rock-kwaito hybrid that raised awareness about rhinoceros poaching in Southern Africa. It is more of a showcase for kwaito and Mandoza, in particular, and Dino posing shirtless on the cover of all digital singles for a song about rhino poaching is certainly a puzzler.

More solo work and more refinement of his rock sound followed with a 2014 album, including the singles “Otkazani let” and “Odlazim.” This is more in the thrash rock vein we find him today, channeling the cock rock swagger of Volbeat with the Sunset Strip blues rock of Buckcherry, the latter especially being channeled in “Odlazim,” with a video filmed at a place called Bikers Beer Factory in Zagreb. The Tripadvisor page is exactly what you’d expect a place with that name to be like. “All in one! You can drink, see a concert or get a hair/beard cut or even learn to dance,” said one reviewer in August 2018. I’d like to see you get a trim at the Whiskey A-Go-Go or Troubadour during a show!

2014 and 2015 were the years it started to come together. You have to be quite sure of yourself to release a fist pumping rocker called “Bad to the Bone” and it is not a cover of the George Thorogood and the Destroyers classic, and it works, even if there’s no danger for George of his version being eclipsed. Some more contests, and Dino had two stints recording vocals for John Macaluso’s new project Stone Leaders, and was also vocalist for a metalcore band called The Ralph.

But in 2016, Dino was recruited as a touring vocalist for rock opera titans Trans-Siberian Orchestra. You might remember them as the Christmas concept band that your Uncle Rick blasts when driving around Odsal Top at 1am in his Ford Escort trying to summon Christmas spirit from the gloom of the surrounding moors. Founded in 1993 by already famous rock producer and composer Paul O’Neill, Trans-Siberian Orchestra gathered some of the biggest names in hard rock, including Savatage’s Jon Oliva and Al Petrelli, Testament’s Alex Skolnick, Whitesnake’s Joel Hoekstra, and Paul Morris (keyboardist for Ritchie Blackmore’s Rainbow), and created a rock opera trilogy about Christmas, an unusual concept for a heavy metal band. Czech entrant to the 2016 contest Gabriela Gunčíková had also had a stint with the group, showing its Eurovision pedigree.

But it worked. On the back of bombastic combinations of rock, heavy metal and classical music, blending Savatage’s riffs with familiar works such as Johann Pachelbel’s “Canon in D” and overlaying a Christmas theme over them, Trans-Siberian Orchestra was and is to this day a sensation, selling more than 10 million albums. “Christmas Eve (Sarajevo 12/24)” is the third highest selling Christmas single of all time, behind “Do You Want to Build a Snowman” from the 2013 movie “Frozen,” and (no prizes for guessing number one) Mariah Carey’s “All I Want for Christmas is You.” The live shows contain elaborate sets and pyrotechnics that O’Neill brags can be seen from space, and always draw full houses at the large arenas and theaters they play. For many families in the United States, a TSO show has become as much a Christmas tradition as a performance of “The Nutcracker” or the Radio City Rockettes.

Though TSO’s last album is from 2013, you will find Dino on tour with the Eastern contingent. In order to accommodate more shows, TSO’s annual sets are split into East and West, with some shows being performed on the same days in different cities. O’Neill himself died of a drug overdose on April 5, 2017, but the tours will go on for the foreseeable future, though it is unclear if the other band leaders will create new music. But if you are in one of the many East Coast cities in the United States this November or December, you will catch a TSO performance with Dino as one of the touring vocalists.

But 2018 is perhaps his best year yet, with Dino forming his new band Animal Drive. With the same swagger, more aggression, more punch, and a guitarist who really loves his pinch harmonics, they released their album “Bite!” to some acclaim. (Metal Temple calls it “near perfect,” and many other reviewers rave on its crisp production, great guitar work, and its homage to American thrash without sounding derivative.)

So as you watch Junior Eurovision this year, bear in mind that you are watching the dawn of many a young performers career. Some may choose to opt out of entertainment altogether (and would Tom Morley’s life be any different had he won instead of Dino?), but for those performers, Dino should serve as an example that you can “Dare to Dream”!