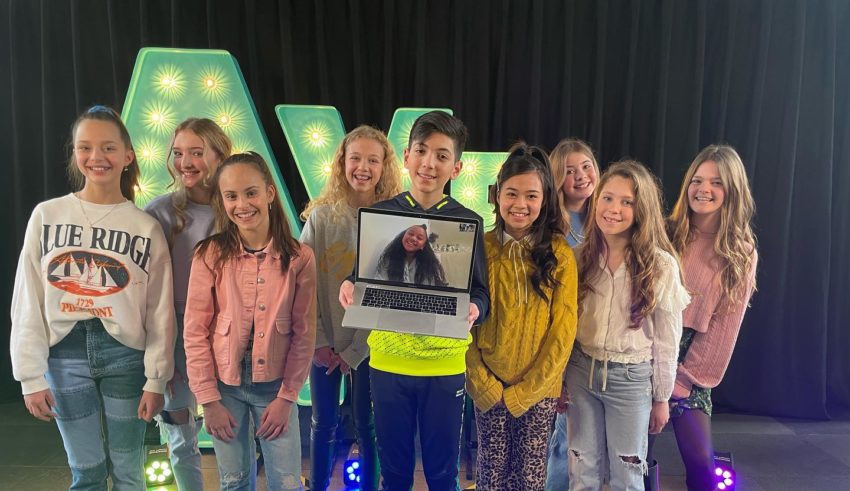 The below editorial features the opinions and views of the quoted reviewer and do not necessarily represent the views of #escYOUnited as a whole, Eurovision or the EBU.

This Saturday, September 25, 2021, The Netherlands will decide who will represent them at Junior Eurovision 2021. The contest ever-presents (now the only country to have been present at every contest since the first one in 2003 now that Belarus was given the boot) gave a great account of themselves in 2019 and 2020, when Matheu Hinzen and Unity came in 4th in both years with “Dans met jou” and “Best Friends,” respectively. And in 2021, with the tournament increased to 19 nations and being held in neighbor France’s capital Paris, the Dutch will hope their Junior Songfestival format yields another great result.

Again, the vote will be split into three: an adult jury, a kids’ jury, and the televote. The Netherlands’ Eurovision 2021 representative Jeangu Macrooy joins Emma Heesters and Rolf Sanchez in the adult jury, while Unity, as well as Jackie & Janae and Robin de Haas from Songfestival 2020, form the kids’ jury.

And as ESC United did last year, we assembled some staff to offer our own opinions and recommendations for whom The Netherlands should send to Junior Eurovision 2021. This year’s ESC United panel is Dutch editor and ESC United’s Instagram guru Melanie Otto, Serbian correspondent and newly minted Master of Eurovision Stefan Resimic, ESC United’s new Texas correspondent William Carter, and Yorkshire’s own California based writer James Maude.

James – 6.5 – “The Dutch mixed up their group formula a little bit here with a boy joining two girls. That being said, not much more deviation as the tight harmonies and wholesome preteen hanging out with friends themes typical of the Dutch entries remain. Armenian fans online are raving about this one because of the young lad Lois’s ancestry, but make no mistake that this song has only the signature Dutch sound at JESC, written by Robert Dorn.”

Melanie – 8 – “And this year’s Junior Eurovision Earworm Award goes to…..SH!NE! After hearing it for the first time, I kept singing “A Million Little things can cheer me up, omdat het zoveel doet en not just a little!” The different voices of the members also blend very well. The male voice just add that little spark that really makes it a wonderful song. I’m a big fan of the build of the song, however I can understand that some people won’t like it and wished it would be more up-tempo from the start. I just love the bubbly vibe they created and I serious think this can be a contender for the win this Saturday.

Stefan – 4 – “The gang looks so good together, but I am sorry to say that the song is so dull. The important thing is that they are having fun! There will be better songs… ”

William – 6 – “The song is pretty standard fare, but (based on the music video) the three singers perform well together and have a lot of chemistry. If their impressive harmonies carry over to the live stage, this will be one to watch. They aren’t the most natural movers in the world, so I’m interested to see how their choreography comes together.”

James – 9 – “There’s a lot to like in this funky number, from the charismatic singer Priscilla, the bass line, and the breakdown. Priscilla’s cool is effortless, like Poland’s Viki Gabor, even though in the video she was stuck in a jacket that looked like it was made from fabric used to upholster diner booths. “Be Alright” should be a winner with the 13 to 14 year old crowd, and is another non-condescending to that demographic pop track that writers Jermain van der Bogt and Willem Laseroms do so well (and did for Hinzen back in 2019). The breakdown is tight, though, and assuming the energetic and constantly flowing Priscilla doesn’t get winded by the time it arrives, should be a highlight to remember live.”

Melanie – 8.5 – “From “Dans Met Jou” to “Dans Met Mij!” You have to agree with me that it kinda sounds alike. Luckily, Priscilla’s song isn’t about going out and hooking up with girls. Her song is actually bringing me in the positive vibe. The song is fun, catchy and I really see this as something that can be popular with the kids. If she can control her singing while doing all the dance moves on stage, she actually doesn’t have to worry about tomorrow. Priscilla is my
personal winner for this year’s Junior Songfestival.”

Stefan – 9 – “Daaamn girl… You got style… She got me up on the first beats. Its a really good teen pop song. My only hope is that the live performance will be a bit more creative than the one we see in the video. And yes I am talking about the four back up dancers.”

William – 9 – “OK, Priscilla! Based on the video clip, she already seems like a seasoned performer. She’s got loads of charisma and attitude, and her dance moves are on point! My only worry is that they will give her TOO MUCH choreography on the night, causing her vocal to suffer. My concerns about the staging aside, this is a party, and Priscilla is a star! I think it’s the one to beat.”

James – 6 – “Are the docks really an appropriate place in the Netherlands for Dutch kids to be courting? I keep expecting Daniel Craig, Jean-Claude Van Damme and Sylvester Stallone to interrupt the Dutch teen date amongst the shipping containers. Otherwise, despite being five girl members, this is a paint-by-numbers girl group track that the Netherlands love sending to JESC in the OG3NE vintage. It’s well done, taps into that preteen friends vibe the Dutch do so well and preteens all over can identify with, but it’s been done before.”

Melanie – 6 – “5 beautiful girls? Check! Amazing harmonies? Check! Great choreography? Check! Amazing Styling? Check! We almost have the full package here! However, the song itself is very mediocre. It really makes me furious. The girls are giving it them all in the music video, but the song is just extremely linear. The girls just can’t show their full potential in this song. I still have hope that they can give us a killer performance at the national final, other ways I’m
scared that Melody won’t be in the race to win Junior Songfestival 2021.”

Stefan – 3 – “A girl group for the Netherlands? NO! Just kidding… Girls are so cute, but I couldn’t say the same for the song. Its a bit too monotonous and repetitive. But thumbs up for their effort!”

William – 6 – “These girls definitely win the award for most stylish! The yellow jacket! The flower print pants! The wind-swept hair! Who knew braces could look so cool? The song is super catchy; I just worry about the staging. Five featured performers is a lot, and this could easily become way too busy on stage. I’m also not sure that a song about a cheating boyfriend is exactly what I’m looking for at JESC, but I’m old, so who really cares what I think?”

James – 7 – “A sweet ballad, especially poignant for kids now who are missing friends and family. Ayana’s especially so, since she is missing her Japanese family and friends while she herself is living in the Netherlands. This sentiment will connect with a lot of kids seeing as multiracial and multiethnic families are now much more common in Europe and Eastern European kids are missing family settling elsewhere in Europe or themselves settled elsewhere. Either way, it’s a classic light JESC ballad but could do with a bit more of a bang at the end. It tries, but doesn’t quite hit the powerful outro this sort of ballad needs to punctuate its theme.”

Melanie – 7 – “This sounds like a breath of fresh air! It’s so different from what we normally see in the Dutch national final. I really love that the song feels like it especially written for Ayana, due to the fact that they’re using Japanese language in the song. The melody and her voice are beautiful. Like this could be an anthem of a new Disney movie. I only wonder if the song is impactful enough to give The Netherlands a second win at Junior Eurovision, because the
build isn’t strong enough for me. It’s there, but it could be more dramatic.”

Stefan – 10 – “I love the video, I can feel her emotions, it’s all there. Just put her alone on stage with some awesome backdrop and you got the winner. We need more songs like this at JESC. Let kids be kids.”

William – 8 – “Staged correctly and sung at Ayana’s vocal best, this has the potential to be a big moment. Definitely stands out from the other three more upbeat entries. The song is emotional, but with a light touch that feels appropriate and authentic. She really has a lovely voice. The sprinkling of, I believe, Japanese-influenced instrumentation that pays tribute to her mother’s heritage is a nice touch. If this wins, I hope they lean into that even more in a revamp. The key change kind of comes out of nowhere, but I still think this could be the dark horse for the win.”

Right, so who does ESC United think AVROTROS should pick to represent The Netherlands at Junior Eurovision 2020? Here is the final tally of points for all four entries:

So in our view, Priscilla should win handsomely coming in with universal praise at an average of 8.875. It should be noted that Ayana also reached the 8 point mark, which here at ESC United means collectively, we think it’s an excellent song with the prospect of doing very well at Junior Songfestival and JESC itself.

Do #YOU agree with our editors’ recommendation of song or singer? Share your thoughts below, in our forum, or in the comments below.