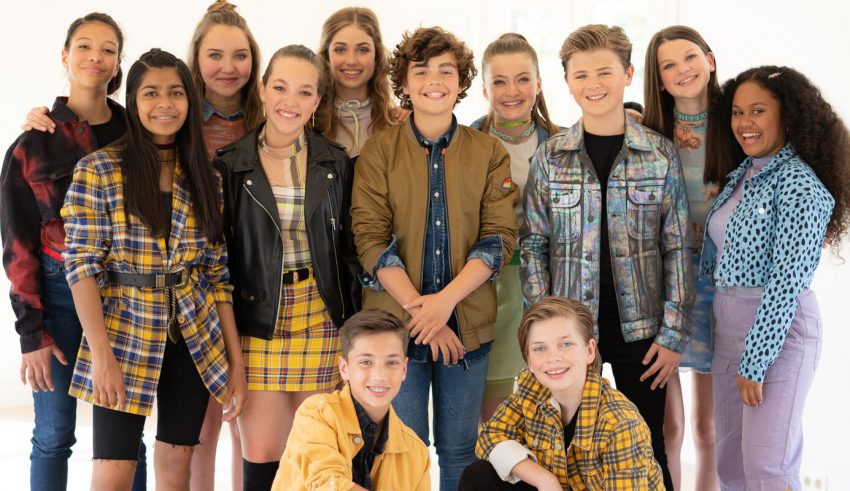 Alright, Junior Eurovision Fans, the first set of songs for the 2019 season have been released, and these four come to us from The Netherlands.

The four acts – M⭐ves, 6Times, Mannes, and Matheu – will compete at Junior Songfestival 2019, the Dutch National Final to be held on Saturday, September 28, 2019. Dutch public broadcaster AVROTROS have released official lyric videos for the four songs, with the complete videos to be released at a later date.

The four acts – one group of four, one group of six, and two solo performers – were named last month, with the group names decided by followers of Junior Songfestival’s Instagram account.

First up, we have the four piece group M⭐ves with “Make Your Move.” M⭐ves is Tess Van der Veer, Luuk Van der Boom, Miencke Kalloe, and Max Kees. They’re coming to Junior Songfestival with a simple, fun and modern dance track. They have an experienced songwriting and production team behind them, with “Make Your Move” being composed by Dutch producer and Dutch Idol / X Factor judge Eric Van Tijn, Mark Van Tijn (who composed Luca Hanni’s 2015 song “When We Wake Up”), Eric Van Tijn’s writing partner Jochem Fluitsma from the Dutch writing group Fluitsma & Van Tijn (who wrote Ruth Jacott’s “Vrede” for Eurovision 1993 and Edsilia Rombley’s “Hemel en aarde” for Eurovision 1998), and Voice of Holland 2015 contestant Babet Van Vugt. Rombley’s 4th place entry is still worth checking out, even if this brand of R&B is a little outdated.

Next up we have Mannes Bakker, a semi-finalist from the 2018-19 season of Holland’s Got Talent. Bakker’s song “Let Me Sing,” a piano driven ballad, takes a different tack, though arguably takes better advantage of JESC’s non-native language rule (the majority of the song’s lyrics have to be in a country’s official or indigenous languages, though allowances for less than 50% can made for another language, usually English) for a rousing, sing-along and clap-along bridge that should get the audience involved should Bakker make it to Gliwice. “Let Me Sing” is composed by Dutch singer-songwriter and DJ Ed Stuijlaart and Dutch bassist Peter Slager.

Third up we have the six girls of 6Times, who harmonize on the slow piano ballad “Until the End of Time.” 6Times are Roxy Dekkerr, Idaila Shaney, Amy Bekema, Gioia Parijs, Yosina Roemajauw-Yawan, and Noa Zwan. “Until the End of Time” is written by Jermain Van der Bogt, who is more well-known as pop and progressive rock vocalist Wudstik of For All We Know (with Within Temptation’s Ruud Jolie) and Ayreon, and experienced Junior Eurovision songwriter William Laseroms. They will have you singing “huuh-aaaahhh” until the end of time on this OG3NE-style track.

Up fourth we have Matheu Hinzen bringing us back to up-tempo contemporary pop with “Dans Met Jou.” And this one is also composed by Van der Bogt and Laseroms. The lyrics on this one need a bit of polish (“If only I could travel time”), but it’s simple, does the job as a fun dance track and with the right staging could be an involving club banger (well, as appropriate and close to club as we can get at JESC anyway) in Gliwice.

The Netherlands have been a mainstay at Junior Eurovision since the first contest in 2003, being one of two countries to have appeared at every event (Belarus being the other one). Ralf Mackenbach delivered the Netherlands’s only win in 2009 with “Click Clack,” and Max & Anne came in 13th for them last year with “Samen.”

The Netherlands also tend to create a launchpad for a successful career for its artists, with Stefania from Kisses in Junior Eurovision 2016 (“Kisses and Dancin’) only last month showing up at the Mad VMA Awards by Coca-Cola in Greece (Stefania is half-Greek) to perform Daddy Yankee and Snow’s “Con Calma” with Greek performers Ilenia Williams and Konnie Metaxa. And yes, it is a cover featuring that Snow, for all you 40+ year-olds still watching out for leaky bum bums there.

In other news, North Macedonia’s Makedonska radio televizija (MRT) have selected their entrant for Junior Eurovision 2019. 14-year-old Mila Moskov from Prilep will represent the Balkan nation in Gliwice.

Expect her song and official video to drop in late August.

14 year-old Mila Moskov will sing for North Macedonia 🇲🇰in Gliwice in November Find out more about her on junioreurovision.tv #ShareTheJoy #JESC2019

Junior Eurovision 2019 will be held on Sunday, November 2019 in Gliwice, Poland. Moskov joins Georgia’s Giorgi Rostiashvili as the only official entrants thus far.

Have any Dutch songs impressed #YOU so far? Any Macedonian fans familiar with Mila Moskov, and if so how do #YOU rate her chance? Let us know in the comments, on social media, or in our forum.