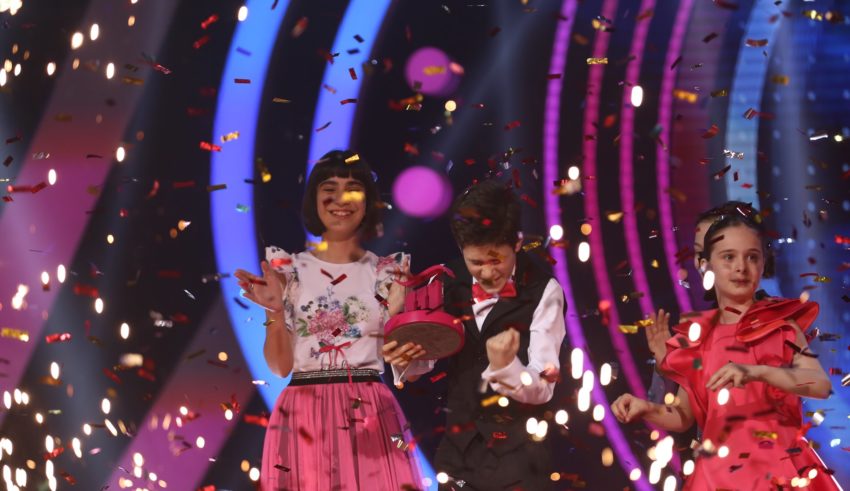 Georgia has made its choice!

The final of Ranina, the singing competition show used by Georgia to select its Junior Eurovision representative, was held earlier today. After the three finalists performed, 10-year-old jazz crooner Nikoloz Kajaia was announced as the winner. His song will be announced soon.

This is the fourth year in a row that Georgia has selected an artist using the Ranina format. The just-wrapped season lasted nearly three months, beginning in September with ten quarter-finalists. That number of kids was eventually whittled down to a final three last week, after the six semi-finalists performed live with noted Georgian a cappella group The Quintessence.

Over the course of this season of Ranina, a number of Eurovision alumni participated as jury members, including Eldrine lead vocalist Sopho Toroshelidze (ESC 2011), Sopho Gelovani (ESC 2013), and Sopho (ESC 2007). The other two finalists were 9-year-old Barbare Makhatadze and 11-year-old Gega Shonia.

For his performance at the finals, Nikoloz crooned a jazz-y track by well-known Georgian vocalist Liza Bagrationi. Roughly translated, the title of the song is ‘Spring Will Come Anyway’.

Georgia has a strong history at Junior Eurovision, winning three times (2008, 2011, and 2016). The country’s entry last year, “You Are Not Alone” performed by Sandra Gadelia, ultimately finished in 6th place.

Do #YOU think Georgia will take advantage of Nikoloz’s jazz bonafides when selecting his song? Is it just a coincidence that every Georgian Eurovision representative named Sopho was on the jury of Ranina this year? Sound off in the comments below, in our forum, or on social media @ESCUnited.