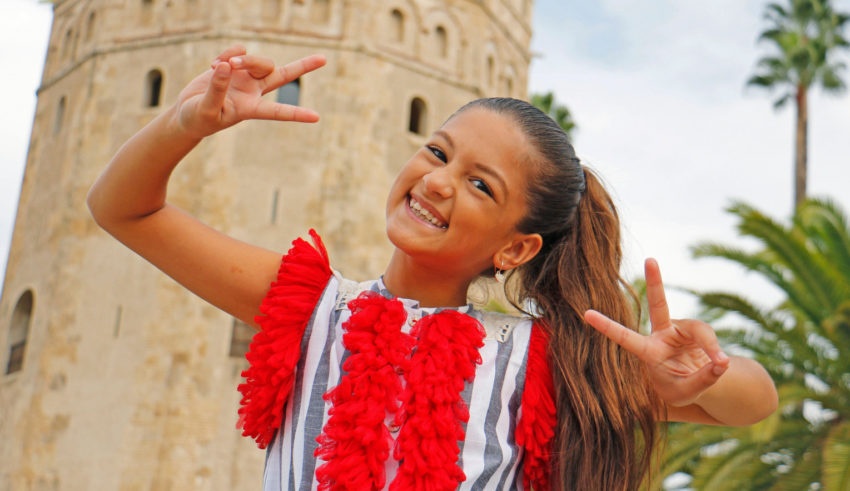 Today we look at a nation that has never been outside the Top Four: Spain.

Oddly enough, the 4th placed performer Dani Fernandez is the most high profile of the four entries as he was a member of Auryn, a boy band that also features Spain’s Eurovision 2020 representative Blas Canto. Auryn made it to the final of Spain’s national selection back in 2011 with “Volver.” “Volver” was co-written by Jonas Gladnikoff, who co-wrote “Banshee” for Ireland’s Junior Eurovision 2019 representative Anna Kearney and is well-known in ESC circles for his many compositions for ESC, JESC, and national selection entries.

And they came back strong as Melani Garcia surged to 3rd place with her stunning eco-popera entry “Marte,” best known for the atom-bombesque dropping of “Ahora!,” “Perdona!,” and “Funciona!” at key moments in the song. This is how you make a comeback to a song contest after a long absence.

On September 9, 2020, Spanish broadcaster RTVE announced that they had internally selected Solea to represent Spain at Junior Eurovision 2020.

Soleá Fernandez Moreno is a 9-year-old performer who is the latest to come from Spain’s famed Farruco family, known primarily for dominating flamenco dancing from the 1950s to the present. Soleá is the great-grandaughter of the great El Farruco.

Born June 19, 2011, Soleá got to work in the family business very early, making a singing debut in 2014 at a Farruquito y Familia show in her native Sevilla, Spain. Soleá is making her name as both a pop singer and flamenco dancer per family tradition.

Solea told Junioreurovision.tv that “with Palante we wanted to send a message to all the young people. We all have to be united, you can still have fun but always with social awareness and responsibility.”

RTVE assembled a strong songwriting and production team for “Palante,” once again announcing that they are seriously gunning for the title.

Bruno Valverde is a 27-year-old Brazilian drummer and songwriter primarily known for his work with metal bands Angra and Uniao. His YouTube drum gear demonstrations rack up impressive view numbers and is one of South America’s biggest under-30 in demand session drummers.

Hajar Sbihi, better known as ASHA, is a 23-year-old Moroccan singer who moved to Spain at age 12 and has established herself as an up-and-coming singer/songwriter in her own right.

Cesar G. Ross is a Spanish songwriter who has composed songs for Spanish pop stars such as Pastora Soler, Alex Ubago, and Gemeliers.

Connor – 8 – “Okay I’ll be honest, I appreciate that Spain said last year’s pop opera song was fun, now have a super sassy flamenco beat pop entry (and if you don’t know what I’m talking about please reference flamenco songs on YouTube and then peep the clapping ostinato rhythm hidden throughout this track). Knowing how much Spain invested into last year’s entry, I know they will go all out on this and I’m really interested to see how this goes. Solea will either destroy this song live and mesmerize the viewers, or struggle to carry the energy of the song live – I’m hoping for the prior. Overall this is a great, unique, and powerful entry only Spain could bring to the table.”

Daniel – 10 – “Oh I am biased like nothing but I have been saying about the adult version that Spain has so much talent and musical inspiration that they can tap into, but I guess they really want to deliver in JESC. This is the junior Rosalia/Maluma, it oozes coolness, modernity and contemporary sounds, it has that flamenco twist to make sure you know its Spanish but its rather a phenomenal beat and a bop.”

James – 9 – “A fun and peppy modern song with nods to latin hip hop, nods to Solea’s family flamenco heritage, and most importantly, keeps it simple. Assuming Solea has an ounce of granddad’s charisma, she should be able to nail this one live (or as live as this version of the contest allows), with the beat propelling the song forward with the simple flute riff being all the canvas she needs to shine. If the kids are thinking they want to keep JESC a modern affair a la Gabor and Wegiel, they should vote for this one. If they want technically impressive and more intricate ballads that keep JESC a siloed affair disconnected from the songs the kids actually listen to, there’s a few of those this year. No pressure kids, but do you want the ballads that this panel of auld geezers favors or do you, like Solea, want to move on and move forward (or, ha!, move the world)? The choice is yours.”

Melanie – 8 – “After their amazing comeback last year with Melani and her song Marte, they now come with an amazing bop in the form of Palante sung by the charismatic Solea. I don’t know what’s wrong with you Spain, but this kind of songs is what you need the send to the normal Eurovision. It has Spanish vibes all over it, it catchy as hell and you don’t have music taste if you don’t immediately want to dance on this song. Please Spain and do the same thing with the regular Eurovision as with the Junior Eurovision, because you really are sending amazing songs to this contest!”

Roy – 6.5 – “Okay, this is the type of music that we have been craving in adult Eurovision from Spain. A nice dance banger that will get everyone moving. And boy did it move me in the beginning. I was completely in love the first 3 or 4 listens. After that I started to calm down and pay more attention to the song and it’s elements on it’s own and it made me realise that the song is actually kind of really hollow. In the chorus you just have 1 pounding rhythm, the flute sounds and Solea singing and that is it! Also in the verses there are only a couple of things going on. This really badly hurts it’s longevity and it made me realize that it is not as amazing as I initially thought and hoped. It is still a fun dance song and it could do really well with the kids!”

Sean – 8 – “Ah man, Seville! The last place I went to abroad before the unmentionable kicked off, almost a year ago. So, this video has a sad tinge for me personally, but this is a cool track! Spain have really tapped into the reggaeton/latin vibe here that their entries (in both contests) have been crying out for and I’m here for it! The production is great, the vibe is great, this is a surprise favourite for me!”

With one more country to go, Spain squeaks into our Top Three, narrowly falling short of Georgia. There has been a consensus that Spain’s change of tack this year is a good one, and will likely yield another strong finish. The lowest score for Spain is Roy’s 6.5 (any latin cred card you earn is immediately revoked!), and three 8 scores out of six indicates this is a well-received song. Almost everyone likes this song, but seems to have a slightly more favorite song in the running. Hopefully for Spain, it’s got enough 2nd or 3rd place likes when televoters are submitting their online scores.

What do #YOU think of Solea’s “Palante”? Do #YOU think this is a step forward or a step backward for the Iberian nation at JESC? Let us know in the comments below, on social media, or in our forum.