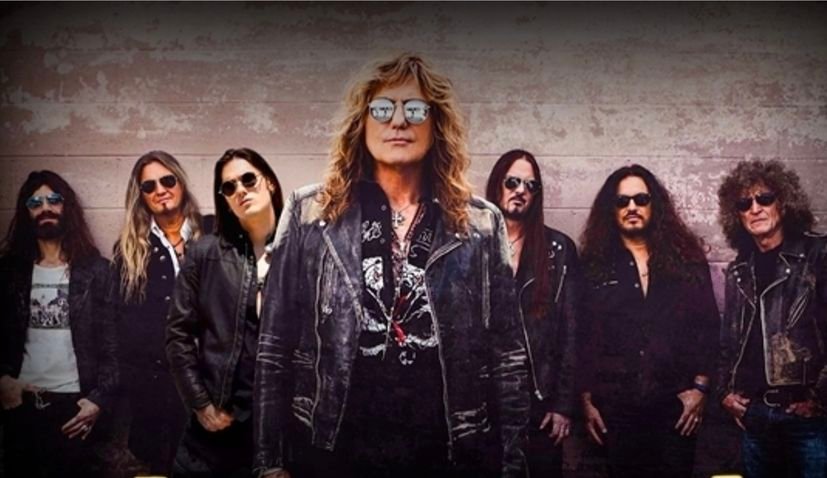 Earlier today Whitesnake frontman David Coverdale announced on his Twitter account a tour of the United Kingdom and Ireland with fellow rock legends Foreigner in May 2022.

“Don’t Worry… We’re Still Putting Europe Together & Awaiting US Dates,” said Coverdale. “We Will Do Everything We Can Visit As Many Places AS We Can, Beloveds of The Snake.”

And before you can say, “hang on, isn’t that Junior Eurovision 2003 winner Dino Jelusick in the Whitesnake band photo?”, Coverdale released a follow-up Tweet welcoming Jelusick into the band.

In a band release on Whitesnake’s website, Coverdale said “I am absolutely delighted to welcome the extremely gifted DINO JELUSICK to Whitesnake. We’ve had our eyes & ears on him since we played Zagreb together 2 years ago. You’re going to love him!”

In addition to doing a concert together with Whitesnake in Zagreb, Croatia, Jelusick has already played with Whitesnake guitarist Joel Hoekstra in both Trans-Siberian Orchestra and on online collaborations during last summer’s pandemic lockdowns.

Due to the collaborations with, specifically, Joel Hoestra and famous progressive rock drummer Mike Portnoy (ex-Dream Theater), Jelusick gained a new fanbase in the United States. Rock websites and zines praised the collorations on their covers of Jefferson Starship’s “Jane” and Boston’s “Foreplay / Long Time.”

Whitesnake was formed in 1978 after David Coverdale had left classic rock band Deep Purple in 1976. Coverdale’s solo debut was “White Snake,” released in 1976. As Whitesnake’s lyrics tend towards the sexually charged and less subtle, no prizes for guessing what “White Snake” is a reference to.

Whitesnake debuted as a band in 1978, and largely stuck to the rock-blues formula that had worked for him in Deep Purple. Over the next decade, Whitesnake began building a sizeable following, but struck the big time in 1987 – A re-recording of the 1982 minor hit “Here I Go Again” exploded in 1987, going straight to Number 1 on the United States Billboard Hot 100, followed by “Is This Love” hitting Number 2 soon thereafter.

“Here I Go Again” is an iconic music video which is notorious as a one woman advertisement for Jaguar. American actress and model Tawny Kitaen, who sadly passed away at the age of 59 earlier in 2021, posed seductively on the hoods of two Jaguar XJ sedans.

Jelusick’s rise up the hard rock ranks has been unusual. He won Junior Eurovision 2003, the inaugural contest, for Croatia with “Ti si moja prva ljubav” (“You are my first love”).

His younger sister Lorena came in 12th for Croatia at Junior Eurovision 2005 with “Rock Baby.”

As Jelusick entered his teens and lost his ability to hit the high notes, he became interested in rock, particularly the more progressive rock type of bands such as Toto, King’s X, and Whitesnake.

Jelusick released a rock album in 2011 called “Living my own life,” but shortly thereafter required surgery due to issues with his vocal cords. The surgery was a success and he underwent vocal training, and then released “Prošao sam sve” (“I went through everything”) in 2014, he first album where he was also the main songwriter. Jelusick had also learned bass and keyboards.

Jelusick, on top of Animal Drive, also became a hired gun for several high profile rock acts, including the renowned Trans-Siberian Orchestra, who still sell out arenas to this day with their Christmas shows in the United States.

Jelusick’s joining Whitesnake will surely help raise his profile performing onstage to audiences unfamiliar with his work and take him to the next stage as a rock icon.

Do #YOU think joining a legendary rock band like Whitesnake is a step forward for Dino Jelusick? Or so #YOU think his other projects such as Animal Drive hold more promise for a long career? Let us know in the comments below, in our forum, or on our social media.