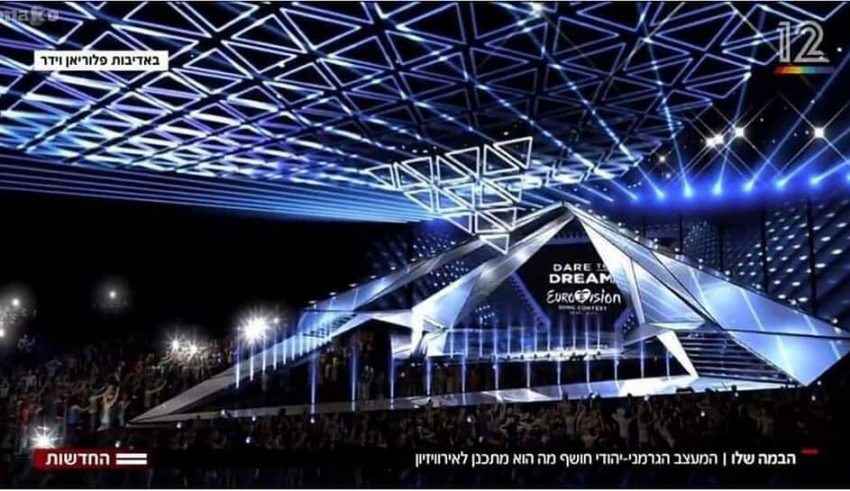 Keshet, one of the leading private broadcasters in Israel and the broadcasting channel of the Israeli selection show HaKokhav Ha’Ba, has revealed further images of the geometric staging for Eurovision 2019, in an interview with its designer Florian Wieder.

The images showcase the variances that can be created by the stage with a versatile setup in the roof of the venue, showcasing the capabilities of another dynamic Eurovision stage. Wieder, the German set designer of Jewish origin who has worked on the staging for the contest in 2011, 2012, 2015 and 2017, as well as international productions like The X Factor and Got Talent series, states in the interview that “a stage is a tailor-made suit that has to fit the show”.

“The inspiration [for the stage] came of course from the Star of David, but the Star is just a shape, it has other features”, Wieder mentioned when asked about the reasoning behind the design of the staging. The new images also seem to showcase the fact that the triangular set up in the ceiling can move in line with the pyramid-like staging or lie flat to form a roof on the venue, allowing for a unique setup for each entry. Similar ideas were present in the 2015 and 2018 stages to a less exaggerated degree.

#YOU can see Florian Wieder’s interview with Israeli TV in the link below.

With thanks to Zohar Ausländer for sharing the information in this article.

What do #YOU think of this year’s stage? Share your thoughts with us on our forum HERE or join the discussion below and on social media!