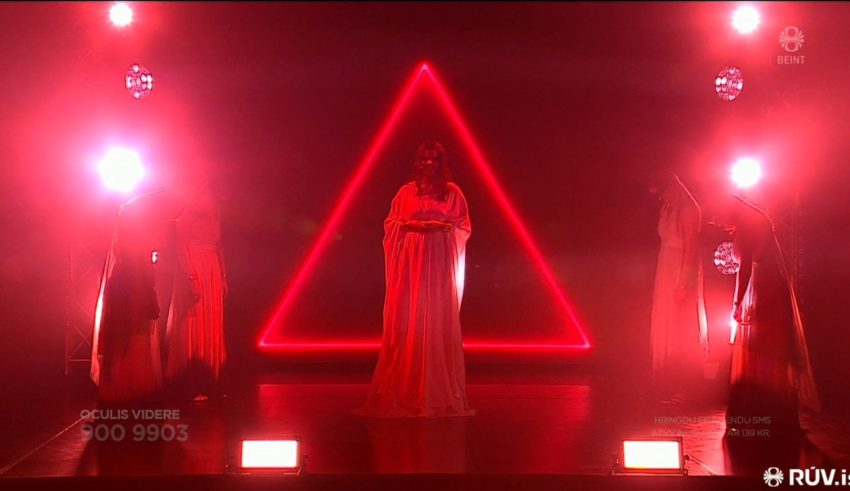 After Hatari’s shenanigans last year in Tel Aviv, Israel, it appears that Icelandic broadcaster Ríkisútvarpið (RUV) opted to pick ten of the nicest acts in the country for Söngvakeppnin 2020, making you feel a lot of sympathy for the acts who do not make it to the Grand Final.

But choose Iceland must and from Semi-Final 2, returning synth-pop group Daði & Gagnamagnið, New Age sensation Iva, and sweet pop songstress Nina advanced to the Grand Final, to be held on Saturday, February 29, 2020.

Heading into this evening’s Semi-Final, fans were wondering what staging Daði & Gagnamagnið would bring this time. Turns out that lead singer and composer Daði Freyr Pétursson felt the staging for his 2017 entry “Hvað með það?“ was good enough then, and stuck largely to the same. So we got keytars, overalls with 8-bit renditions of the bandmembers’ faces on them and on the screens behind them, as Daði & Gagnamagnið’s “Gagnamagnið” (“The Amount of Data”) kicked off the night.

Following on was Hildur Vala and “Fellibylur” (“Hurricane”), an appropriate metaphor considering those watching Söngvakeppnin 2020 on RUV 1 before the show saw that Iceland had orange and red level storm warnings across the country. Sadly, Hildur’s act fell to what is becoming known in ESC fandom as Sennek’s disease (a promising balladic act let down by poor staging, named after Belgium’s doomed act from 2018).

Third on the night was another eagerly anticipated act in Iva, whose New Age “Oculis Videre” has a very vocal and passionate fanbase. And those concerned about staging were put at ease, as Iva’s presentation delivered the doom and her vocals sent shivers down the audience’s spines. Rich in New Age imagery (backup singers in flowy white gowns with blindfolds painted on them, triangles, moon) and shrewd use of color, lighting and space on the stage, Iva proved “Oculis Videre” will be ready for a grand stage should she win the whole contest.

Next up was Nina and “Ekko,” who won the Jury wildcard pick for the Grand Final. Her staging certainly will cause some to reevaluate their initial impression of the song, and though not an anticipated act heading into this Semi-Final, she certainly worked to make an impression where her original recorded version did not. 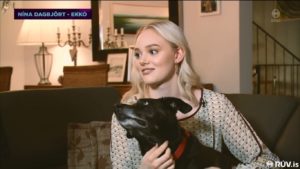 How can you not root for Nina when she brings her dog to her interview and has her own mother as a backing vocalist?

Last up was Matti Matt, who you may recall as one of the vocalists from Sjonni’s Friends from Eurovision 2011. Matt is a great vocalist with charm and stage presence, but his song did not make him standout from the crowd.

To date, Iceland’s best showing at Eurovision remains two 2nd place finishes – Selma’s “All out of luck” from 1999 and Yohanna’s “Is it true?” from 2009. Hatari broke Iceland’s four year non-qualification streak, and the pressure is on to find an act to provide a second consecutive qualifier.

Despite non-qualification, Iceland remains one of the most popular countries for Eurovision, with TV ratings often topping the 95% of households watching television at the time of the Grand Final tuned into Eurovision.

Do #YOU agree with the three qualifiers? If not, who do #YOU think should have qualified for the Grand Final instead? Let us know in the comments below, in our forum, or on social media.