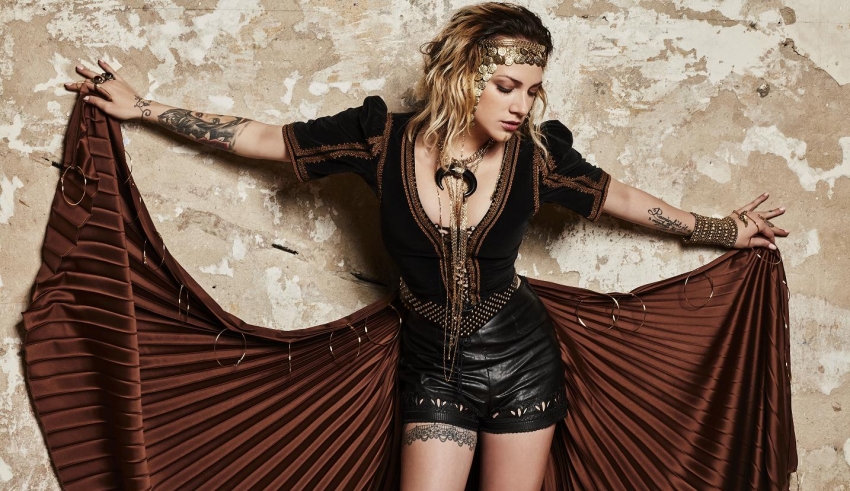 She rocked the stage last week with Hosszú Idők and this weekend she will try to to fight her way to the Grand final of A Dal.

Yes we are talking about Gabi Toth, one of the fan favorites to be the next Hungarian hopeful at Eurovision.

How was the idea for “Hosszú Idők” born?
Can you tell us what is the song really about?
Also are you planning to release an English version?

The title means something like: a long long time. 🙂
This is the first song I did not just perform, but I was part of the song writing. When I was very young I totally fell in love with Hungarian folk music and folk dance. I was performing as a folk dancer for years as a teenager. These are my roots and I still love this kind of music.
I tried myself in pop and rock music as well and I love it, but the folk and world music inspire me the most.
I was writing the song with my companion Freddie Shuman and my friend Lotfi Begi.
The song is about a little bird, an oriole, who wants to sing a song on the most beautiful tree, but the big black crows don’t let her, but she is not giving up. She fights and put away the big, wicked birds.
It is an allegory and the truth is that the little bird is me. I have started my carrier twelve years ago and it was so hard to reach my goals to prove my talent. Sometimes it is still not easy.
The main theme of the song is Hungarian folk music. The life sometimes is very complicated because of the many languages people talk all around the world, but they make it more colorful.
This song, I think works the best on my mother language and the music, the feelings and the mood makes it work – so I’m not planning
to make English version.

You are one of the favorites to win A Dal according to Eurofans. How does that make you feel? It is an amazing feeling, thank you! I’m very grateful.
The truth is I did not really want to send in my song, but the producer of the song (Lotfi Begi) was very strict, he said we have to try it. I believed him, as he represented Hungary at the Eurovision Song Contest in 2012 with his band, Compact Disco.
So here we are, the song is among the top 18 and I truly believe we can go to the top 8 this Saturday. I hope I can show this song, the authentic roots of the Hungarian music to as many people as I can.
I would love to represent my country at the Eurovision. Without roots it is hard to connect with the present and the future.
It is an amazing feeling to get so many positive messages and gratulation. I was afraid a little bit, as this was a brand new style from me, I was very curious what people will say, but I’m very happy now.

Since the style of the song is quite unique, can you tell us something about the stage performance?

Two female vocalist helps me and three amazing male dancers.
The boys represent the crows and I’m the little oriole.
My dress is simple, I did not want to look like a bird covered with feathers. But later maybe I will change my mind…

What is your favorite Eurovision song?

I loved the last years winner Jamala! But it is so hard to tell…
So many talented musicians, bands and singers perform at Eurovision. Dozens of exciting songs year by year.
It’s almost impossible to choose.

Would you be so kind and tell our readers something interesting about yourself?

My sister is a singer as well. I started my career in the second season of Megastar, a Hungarian singing talent show, where I ended up at third place. However, my sister was the winner of the previous, first season.
It was so hard to stand on the same stage a year later, where she finished the show as the Singer of the Year. But I wanted to do that so much.
We are very close and we used to perform together.
She is an amazing talent.

And, in the end, do you have any message for our followers and Eurovision fans all around the world?

No matter what, be yourself. It is a harder way, but the only way that can bring you to your happiness. And think positive!