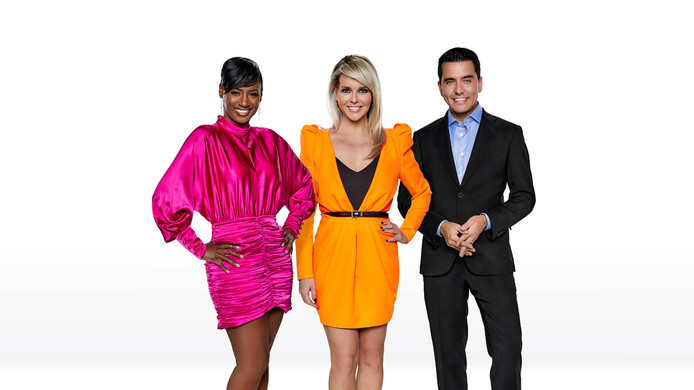 It has been a while coming and the speculations ran wild all over Europe about who might host the 2020 contest. Many big names were rumoured to be the ones to take on the job, and earlier today the news finally came out through social media and through the official Eurovision website. AVROTROS has just made it all official and the rpesenters of Eurovision 2020 will be: Edsilia Rombley, Chantal Janzen and Jan Smit! Let’s take a small look at our 3 presenters!

Edsilia Rombley(41) is probably the most well-known among the Eurovision community. Not only did she participate twice in the contest before (4th in 1998, semi-finalist in 2007) she is also a regular host of the Eurovision pre-party: Eurovision in concert. She usually does this incredibly well with announcer and mister Eurovision for the Netherlands, Cornald Maas. She is an often seen on talkshows once Eurovision season comes to it’s climax and has some decent experience hosting other shows in The Netherlands as well. The combination of a good, likable and fierce presenter together with her love and passion for Eurovision make her a very suitable candidate for the hosting job!

Jan Smit(33) is also a very known name inside the Eurovision world as well. as he co-commentates the semi-finals and final for The Netherlands alongside Cornald Maas. Originally he started off as a young singer that took The Netherlands by storm with his hits. Throughout the years he took on a few hosting roles as well and he became Cornald Maas’ sidekick since 2011. He is also a host of the very popular TV-show “Beste Zangers” in which really good singers perform each other’s songs to each other in an intimate setting. This often leads to emotional moments and also is a source to kickstart the Dutch Artist rumours. This year Floor Jansen became highly rumoured after appearing on the show. Also Jan was highly rumoured while he supposedly took English-lessons to make him better suited for the job. He is a very approachable, kind and passionate guy, so he should be a good choice as well.

The third host is probably the least known in the Eurovision world, but is probably the most known and beloved in The Netherlands. Chantal Janzen (40) has done numerous hosting jobs including shows like “Holland´s Got Talent” and “Everybody Dance Now”. She has also starred in a lot of musicals and has even co-hosted the German version of “The Voice Kids”. Besides that, she has produced a few shows of her own like the much liked “Chantal blijft slapen” where she visits famous Dutch people and has a sleepover with them. She is a very humorous person and has proven in the past that she has the ability to make a lot of funny and quick-witted comments. In 2011 she made the switch from public broadcaster AVRO to the commercial RTL. This is the main reason why people were doubtful whether she would be getting the job or not, but AVROTROS decided that she should be the one!

Those are the 3 presenters for Eurovision 2020.

What do #YOU think about the 3 presenters pushed forward by the Dutch broadcaster? Are #YOU excited, or would you have liked to see others be the hosts? Share your thoughts with us on our forum HERE, below in the comments or on social media!