Home 2017 Georgia – The trio Brandon,Eteri and Vahtang “The first idea was to make a nice, positive song that everybody can sing” 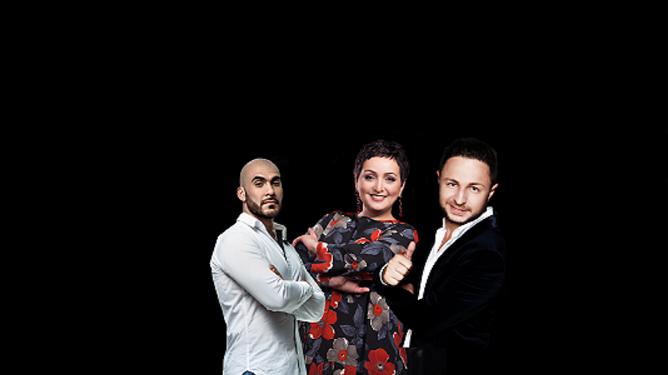 One week to go for the national final in Georgia. Today we had time to talk to Brandon Stone, Eteri Beriashvili and Vahtang whom together will be participating with their entry “Heyo Song”

Hello Brandon, Eteri & Vahtang
First of all thank you for your time talking to us. How are you ? Can you introduce yourselves ? What can you tell us about yourself?

Brandon : Hello I m Brandon Stone.Composer, Singer, Producer. I was born in Georgia, but for many years I live in Germany.I wrote over more then 700 songs,I sing by my self, and also many of Russian and international Artist singing my songs.I also won Ammy Award in Indonesia for a best producing Album for a singer names Sandhy Sondoro, I wrote the Filmmusic for a American movie Enemy Within, Starring Eric Roberts and Romina Di Lella. And in 2012 my song I wrote “Love is Blind” which was performed by a talented Singer Donny Montell, who was representing Lithuanian the Eurovision Song Contest in Baku.

Eteri: Hello I m Eteri Beriashvili.I was born in Georgia, but also for many years I have been living in Russia. I started my Carreer in a vocal band A Capella Express. My passion was always Jazz, so i was singing in a lot of places and festivals, i always wanted that Russian people will hear Jazz Music, and its so exiting when so many people commin to my concerts to hear Jazz. I also participated in the Voice of Russia some few years ago. Now I can give love and passion to lot of people through my music.

Vahtang: Hello I’m Vahtang. I’m a beatboxer, singer and raper. I was born in Georgia, but now I live in Russia.I am 5 times Russian champion in Beatbox and also One time World champion.My singing career I began just a year ago, when me and Brandon we wrote a song called “Ona” together  and this was  first time in my life that I have sang a song.This song became a big hit in Russia, for 6 weeks  we were number 1 in Itunes charts and Shazam. So I thought if it’s going so good, why not sing and beatbox together. Currently, I am working on my new Album, and the music producer became my friend Brandon Stone.

Your song that you will be presenting for the national final in Georgia is “Heyo Song”. What can you tell us about the song?

Brandon: I have wrote this song.The first idea was to make a nice, positive song that everybody can sing and have fun.The idea started a year ago when Eteri & I. And we though why not write something for Eurovision. I already had experience writing songs for Eurovision and we thought why not participate by our selfs. So the song was produced, but when Eteri sent the song to Georgian Public Broadcaster, they called us and said that we are 3 weeks to late. So we thought, ok it have to be like that, and we forgot the song for one year.

After one year our PR manager said, that the Georgian Public Broadcaster has opened the submissions for the new national final, and so we will decided to submit the song again and we are here with in final.

Eteri: Than Brandon brought up the idea to put something fresh to this song, so we thought that it will be Vahtang! He brought coolness and the modern element in Heyo Song, so it is the first time that 3 known artists came together for one Song to represent Georgia.

Brandon: Like I already said before , I wanted to write a special song for the Eurovision Song Contest. I was in stuck in the traffic in Moscow, driving for hours and hours to get somewhere, and I thought in  that I need something positive and don’t want to think that I already stayed for 3 hours stuck in traffic. So as I finally arrived in a Studio the melody came in one moment. Than I played the song to Eteri and she was exited.

What is your impression of the Eurovision Song Contest in general? Do you watch it every year?

Vahtang: We always watch Eurovision with my family. It’s a great show and everyone of us wanted to participate there. So now the chance came and we hope that we will represent our Country in Kiev.

Apart from the Eurovision Song Contest , where would you dream to do a performance?
Eteri: We all have a dream . One day to perform in New York City in Medison Square Garden.

Has being on tv made you more self-conscious?
Brandon: Yes, A lot! Being on TV and famous means you have to control everything you say, you know that one wrong word and everything what you has build for many years in you career can end in one moment , so yes you have to be  more self conscious. Of course you always have to be open with everyone and be positive.

Brandon: Like I’ve sang in one of my songs. Never give up, always be strong. Even when sometimes you feel you can’t do anymore. You have think positive, never give up and everything start to look better.

Eteri: My mother always told me to take every chance you can get, in these chances will be always something good for you and your future

What is a typical day like for you?
Eteri: When I am with my family , my day begins by taking my child to school, after attend to many meeting, and than I go to my studio to arrange or compose new songs, after I meet my frends if I have any time left.

But the day can go different if I am on tour. I have to stand up very early, go to radio intervews, go to photoshoot, attend to rehearsals with my band, go to sound check and in the evening I perform somewhere and then I catch a plane to fly to the next performance.

Vahtang: I don’t have any children yet, so my day is just music, sport, writing songs, interviews and sometimes play videogames with my friends, but this happens just once a month.

You can listen to Brandon’s, Eteri’s & Vahtang’s song “Heyo Song” on this link below :