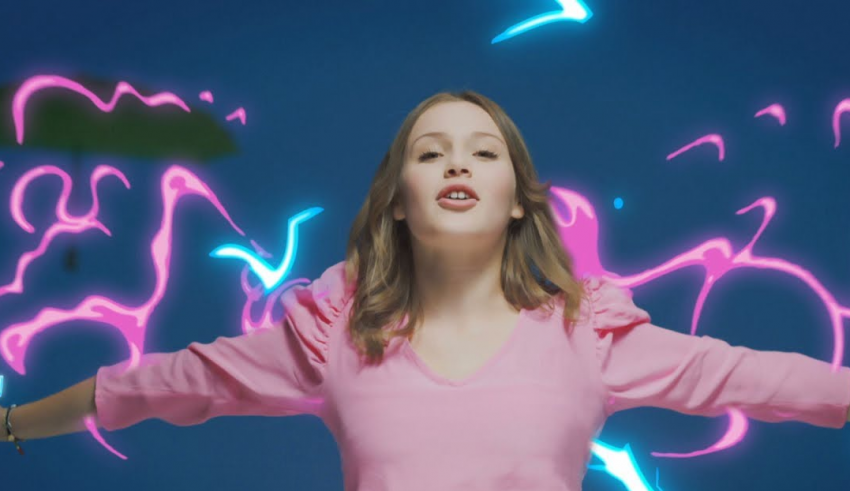 Another sun rises and with it come more JESC entries for the upcoming contest in Gliwice-Silesia. France kick off this rather drab Friday with an uncontested bop: They are represented by 14 year old Carla Lazzari who will perform the song “Bim Bam Toi”. Carla had previously competed in the French edition of The Voice Kids, reaching the final under the guidance of ’93 representative Patrick Fiori, of “Mama Corsica” Fame.

The upbeat banger instantly stands out with a video clip featuring bright secondary colours and energetic dance choreographies. The melody is very reminiscent of Serge Gainsbourg. Carla navigates a libretto rife with puns and onomatopoeiae that tiptoe the line between innocent and innuendo, flanked by the organized discord of a fully unleased trumpet clarion. From an arragement perspective, it is similar to Ilona Halytska’s “Urok Hlamuru” (JESC Ukraine 2007) and Minouche Barelli’s “Boum Badaboum“ (ESC Monaco 1967)

The Gainsbourg inspiration isn’t much a surprise once you consider that one of the songwriters is none other than Igit. You may recognize the French-Israeli songwriter from Destination Eurovision in which he competed two years ago with the song “Lisboa – Jérusalem”.

He did pretty well, reaching the final, where he and six fellow candidates had to cede the victory to Madame Monsieur’s “Mercy”.

“Bim Bam Toi” is the third French entry for the Junior Eurovision Song Contest, where the French have one of the best average track records. Their 2004 début entry, “Si on voulait bien” by Thomas Pontier, finished in a respectable 6th place.

It would take fourteen years for the French to make their second attempt as JESC gold. As you all know, Angélina fared even better than Thomas did, obtaining silver in Minsk with “Jamais sans toi”.

We will have to wait until the 24th of November before we know whether Carla can grab gold in a Bim-Bam-Blowout, or will have to settle for a less good result.

France is the seventeenth country to fully release the JESC entry, leaving only the entries from North Macedonia and Malta shrouded in mystery.

What do #YOU think about the French entry? Do #YOU recon they’ll make a splash at the upcoming JESC? Let us know in the comments, on social media or on our forum HERE