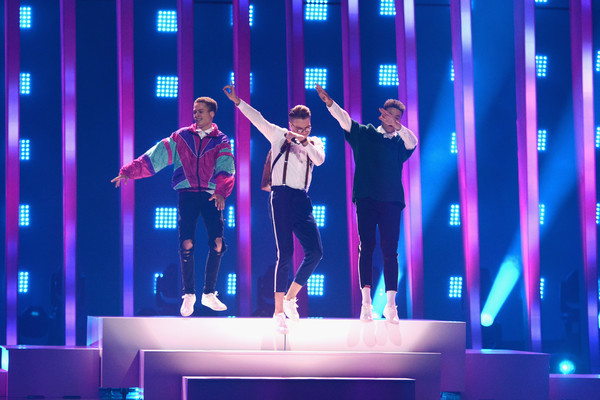 Hello and welcome back to Eurovision This Decade! We as a team have looked back at the decade that was the 2010’s and looked at every country’s journey. Today we’re looking at and ranking the Czech Republic’s entries. But before we get onto the Czech Republic let’s see how #YOU voted in the Cyprus poll!

And, is it any surprise really? 2018’s Eleni Foureira swept the voting with 47% for “Fuego”, followed by 2012’s Ivi Adamou with “La La Love”, receiving 19%. Third place went to this year’s “Replay” by Tamta, with 14% of the voting. A clear favourite for Cyprus, but how close will it be for the Czechs?

Czech Republic have participated 5 times this decade after returning to the contest in 2015 after a 5 year absence. Let’s take a quick look at their track record and then get into our rankings!

Performed eighth in the second semi final and failed to qualify for the final, coming 13th on the night with 33 points.

Performed tenth in the first semi final and qualified for the final in ninth place with 161 points, the first time the Czech Republic had reached the final. Gabriela then performed second in the grand final and finished in 25th place with 41 points.

Performed 14th in the first semi final and failed to qualify for the final after finishing 13th with 83 points.

Performed fifth in the first semi final and qualified for the final in third place with 232 points. Mikolas then performed 14th in the grand final where he finished in sixth place with 281 points, the best Czech result to date.

Performed sixth in the first semi final and qualified for the final in second place with 242 points. Lake Malawi then performed third in the grand final and finished 11th overall with 157 points in total.

All our team members have ranked the Czech entries. Here are our thoughts on our favourites and why we chose them.

I’m sure everyone expected me to pick Mikolas or Lake Malawi. But no one ever remembers that Gabriela was the first artist to qualify into the grand final for her country and gave a stellar performance. And this song is one that hasn’t aged one bit since 2016. It’s so dramatic and elegant, and they really allowed her to shine in this song. Plus I admire the fact that this song really builds with every second. There’s a beautiful shape and story to this song, and it’s my favourite Czech entry ever.

Fun and funky. A song as serviceable as Josef’s backpack in “Lie to Me.” The Czech Republic have only just warmed up to Eurovision, though Josef’s entry is a stride in the right direction.

When I first heard this song in the group of six in their national final last year, I was amazed that they didn’t just pick this internally. Lie to Me is the big slice of fun we all needed last year and despite being a fun song it’s also extremely credible. Mikolas is such an excellent performer and everything about the performance was really enjoyable. I was thrilled to see this do so well as they really deserved it, especially considering their awful track record before that.

Although I did debate quite a bit between place 2 and 3, my number 1 is very clear. Mikolas brought the Czech Republic its first success with a nice modern “dance”-song. Not only that, his charisma made sure that he scored a major record deal with Sony Music. When this came out I had it on repeat for weeks, I danced to it nearly every time and I tried my best to “sing” the entire song.

The Czech Republic in recent years are really putting their strong foot forward, and the slick indie-pop of “Friend of a Friend” is a thrilling 80s pastiche from the very charismatic Lake Malawi. Mikolas Josef may be the obvious choice for the Czechs in the 2010s, but this was criminally underrated by a lot of people and I’m thrilled they got recognition in Tel Aviv for their simple yet effective earworm.

I’m surprised myself that I put this first, but there is a special place in my heart for the Czech’s first qualification.

We’ve combined all our rankings for the Czech entries and converted them in Eurovision style points. Here they are!

2018’s “Lie to Me” received the most plaudits from our members, with only one member picking it outside their top two. 2016’s first qualification in “I Stand” is second in our ranking, just slightly over “Friend of a Friend” from this year’s contest.

In the poll below #YOU can vote for your favourite Czech entry from this decade!

We’d love to know what #YOU think of Czech Republic’s entries and the series as a whole. Get in touch with us by commenting below, posting on our forum or visiting our social media pages!