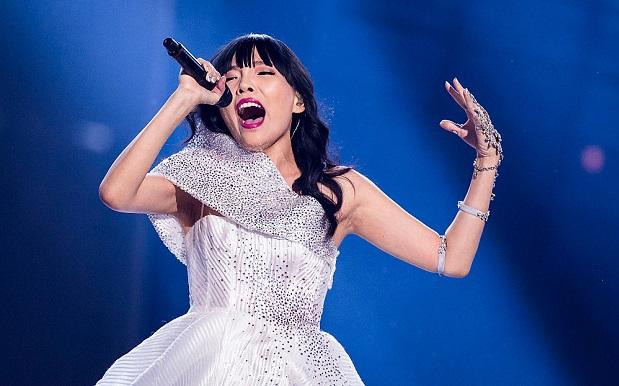 Hello, and welcome back to Eurovision This Decade, series where we as a team go through each country’s Eurovision adventure through the 2010’s and give you our opinions on their entries! Today it’s Australia’s turn. But before we get into Australia lets take a look at who you the readers picked as your favourite for Armenia!

In a tightly contested poll, 2016’s Iveta Mukuchyan with “LoveWave” is your favourite Armenian entry of the last decade, with 38% of the vote. Second went to the most successful Armenian entry in this decade, Aram Mp3’s “Not Alone” with 32% of the vote, and third goes to 2017’s “Fly With Me” by Artsvik, with 11%. Now, to the only debutee nation in this decade…

Australia has participated in the contest five times this decade after debuting in 2015 and has given us five very memorable entries. Let’s take a quick look at their track record and then get into ranking!

Qualified for the final automatically as a special guest. Guy performed 12th in the grand final and finished fifth overall with 196 points.

Performed 10th in the second semi final and qualified for the final in first place with 330 points. Dami then performed 13th in the grand final where she finished as runner-up to Ukraine with 511 points.

Performed third in the first semi final and qualified for the final in sixth place with 160 points. Isaiah then performed 14th in the grand final where he came ninth with 173 points in total.

Having been a special guest performer in 2014, Jessica performed 9th in the second semi final and qualified for the final in fourth place with 212 points. Jessica then performed 16th in the grand final and came 20th with 99 points.

Performed 12th in the first semi final and qualified for the final in first place with 261 points. Kate then performed 25th in the grand final and finished ninth with 285 points in total.

Listen, if you know me, you know I love a good pop opera song. And this is NO exception to that rule. This was a close call between “We Got Love” and “Zero Gravity” because I love these songs so much, and I want to give Jessica some credit here. But I chose Kate as my first rank because of the staging. While we know that we will get another opera song at Eurovision, I don’t think we will ever get one where the artist is flying around on a 20 foot pole WHILE belting notes that are out of this world. Stellar. Intergalactic.

Though Dami Im was robbed of a righteous victory in the whole Jamala vs. Lazarev drama, my favourite Aussie entry has to be Miller-Heidke’s post-partum popera masterpiece “Zero Gravity.” A cleverly crafted Eurovision anthem, fantastic staging, and a flawless vocal performance.

Most people won’t agree with my choice for Australia but to me, “Don’t Come Easy” is just a beautiful and soulful ballad. Isaiah’s voice is absolutely outstanding, and he elevates the song even more for me. This is a song I’ve come back to very regularly since the 2017 contest and I personally feel getting just 2 points in the televote was ridiculous. I concede his live performance wasn’t the strongest of the competition, but he deserved a lot more than just 2 points… Thankfully the juries saw what I saw, and he got a respectable position in the end!

Yep, their first ever entry still stands strong as my favourite. They definitely brought a nice funky flavour into the contest that is easy to remember. It is a song that I would still dance and groove to if it were to be played somewhere.

Despite a shaky live vocal which got progressively worse over the course of the rehearsal schedule, I still have to give it to Jessica for bringing us a catchy upbeat number with addictive qualities and a modern production. It’s a shame the live performance couldn’t match up to what this song deserved, but on the balance of Australia’s offerings this song still comes out on top in my opinion!

Floored expectations, whenever I want to show a Eurovision performance that was masterful, this is the one I share.

We as a team all ranked Australia’s entries from 1-5 and converted them into Eurovision style points. Let’s see who our favourite is!

Tightly contested of course, but 2016’s “Sound of Silence” edges out the competition to take our team’s title. But what do #YOU think?

What do #YOU think of Australia’s entries this decade, and this series as a whole? Get in touch with us by commenting below, posting on our forum or visiting our social media pages @escunited!