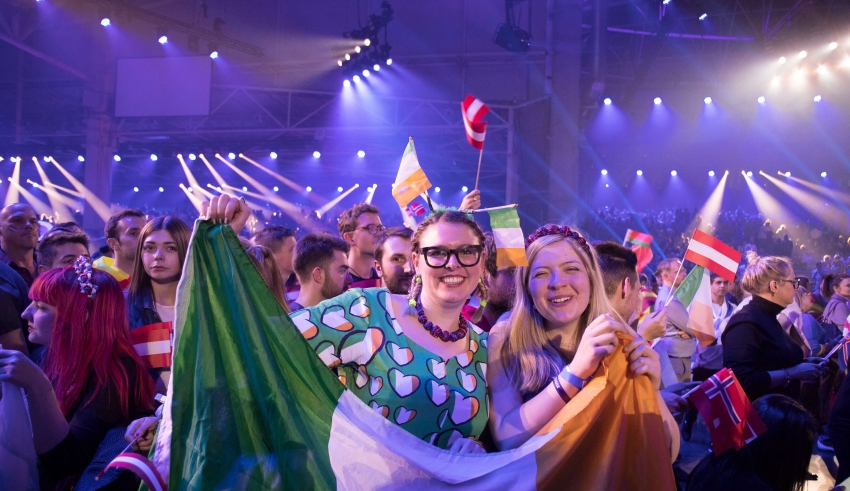 After the hoopla that occurred earlier in the year regarding the lack of tickets for OGAE fans, Eurovision thankfully smarted up and ensured tickets to the OGAE clubs.  As previously noted, the need for super-fans is a vital aspect Eurovision, be it the live shows themselves or the entire culture surrounding its fandom.  And let’s be completely honest; when I used the term, “super-fan,” we all can read between the lines and understand that I am mostly talking about OGAE members (from here on forth deemed “OGAEers”).  And to be sure I cover all my bases, I know that there are many non-OGAE members, such as myself, that could also fall into the “super-fan” category.  But in this editorial, I revisit what I wrote back in February about “super-fans” and provide further comments given my experiences in Kyiv with the “OGAEers” during the 2017 Eurovision Song Contest.

“if we want to label [OGAEers] as nothing more than props to a live show, no one can deny that they project great enthusiasm and are the best to epitomize the passion that encompasses Eurovision.”

Despite my sarcastic comments about OGAEers paying top dollar to serve as live props, they are worth the EBU’s investment.  First, the EBU is helping to ensure that all six shows that matter to the results (3 jury shows, 3 live shows) are filled with enthusiastic spectators cheering loudly and singing along to every song.  Warm and hospitable applause is provided to all artists, regardless of their status as favorites, near-potential qualifiers, or “no-chance-in-hell” non-qualifiers. But what is more important is the energy that OGAEers project on camera.  Watching some of the initial rehearsals followed by the daytime dress rehearsals, it was awkward to see camera shots of empty floors that would be meant to be taken up by the super-fans.  Those moments of empty space were enough to change the mood of the performance; they felt incomplete.  Incorporating the fans made all the difference.  Portugal was smart to put Salvador on the small stage, so that he could be surrounded by the fans, thus providing a warm, inviting, and intimate performance.

“In countries where Eurovision is less-known,… these super-fans…are integral to helping drive viewership to Eurovision.com and the national broadcaster,”

In our official ESC United drinking game, we included taking a drink if you saw unenthusiastic fans in the audience.  This was because we saw so much of this during the rehearsals.  We were aghast at audience members, many of whom we assumed actually paid for dress rehearsal shows, simply standing there, checking their phones, at times not paying attention to the performances, and not engaged whatsoever.  Perhaps, the manner in which they enjoy Eurovision is more laid-back than that of a super-fan.  But my thought is that if I paid money to be at a show, I’m going to immerse myself.  Take 2013 for example.  I used to watch American Idol at home and loathed the whole hand-waving antics of the audience during ballads.  But when the stage director requested that we do it during the Russia (“What If”) performance, I was sucked into the experience and consequently, all in!

This energy of the live shows is enhanced being surrounded by so many other people that you know are fellow super-fans.  These fans are willing to stand through the shows (not including the time prior to ensure grabbing a good spot!). Yet, they throw caution to the wind, giving it 110% to scream their way through the entire show.  Thus, when you watch the live shows, lots of love is given to the audience members in the standing sections, comprised mostly of OGAEers.  The producers know showing these fans paints a picture that everyone in attendance are definitely grabbing the moment.  At times, you could even feel the artists on stage feeding off of the audience energy.  I felt that during Semi-Final 1, Blanche from Belgium gained the most, as if any stage fright that she may have had prior was washed away by the fans.

The audience not only benefits the artists and their delegations, but also the EBU.  An energetic environment changes the dynamics and allows the viewing audience at home to be further engaged.  Without a lively audience, you are stuck with any ordinary awards show.  It is no wonder that the EBU made the bold decision to implement standing tickets; it is something we are seeing more of in numerous performance-focused television shows.  It was seeing the rambunctious “OGAEers” that I first told myself in 2012, “I don’t know how, but I’m going to go to Eurovision 2013.” The rest is history for me.  But I am not surprised if others at home that were watching via their televisions said the same things after the Portuguese victory.

“Although [OGAEers] make up a small proportion of the actual viewership, their status within Eurovision is irreplaceable.”

As preparations for each edition of Eurovision progresses, the EBU and the host national broadcaster rely on many volunteers, both local and international.  But one thing that struck me about the OGAEers was their willingness to designate themselves as resources for the newbies.  At EuroClub, I met numerous people who ended up meeting OGAEers out and about in Kyiv.  They told me that the OGAEers provided tips on the many ways to experience Eurovision outside of the live shows, be it going to EuroClub to dance to Eurovision music all night long, stopping by meet-and-greets at EuroFanCafe, or joining an OGAE club to keep the party going year-round.  While at EuroFanCafe, I also saw the numerous activities hosted by OGAE, include a lecture series that discussed costumes, camera angles, and other staging aspects.  As a former OGAE Rest of the World member, I also got to see the group send well-wishes to their long-time president, Roy van der Merwe, who was stepping down after many years of service.  And for me, Roy is held in high esteem, alongside Matt from ESC United, Will and Deban from WiwiBloggs, and Samantha Ross from ESCInsight. These five individuals were the individuals who helped me, as a newbie, become a member of the Eurovision family.  And in reality, OGAE is just; it is more than a fan club; it is a family that is always willing to take in new members and welcome them with open arms. I will not lie that I have butt heads with certain members, but at the end of the day, we have always been able to look past their minor quibbles and celebrate our shared love and passion for Eurovision.  When they meet Eurovision first-timers, OGAEers without hesitation strive to ensure that they have as much information as possible about what they can do to experience Eurovision to the fullest.  The more, the merrier we say I suppose.

“Without super-fans, Eurovision may continue.  But the show will lose its spark by undeniably losing a major component to its marketing and personality.”

Sure, the show will continue.  Viewership will persevere.  But the EBU will lose the free marketing and advertising that OGAEers have provided over countless years.  Sometimes, OGAEers can get lost in their passion and forget that at the end of the day, Eurovision is supposed to be a fun song contest.  But we must never discredit them for having such strong feelings towards a song contest that has recently celebrated its sixtieth birthday.  For many, Eurovision is an escape from their normal day-to-day lives.  For two weeks, we can travel to somewhere we may have never gone before had it not been for hosting Eurovision and learn more about what makes us humans. I have marveled at the diversity of the membership of OGAE, awed at hearing the stories from members who have been going to Eurovision for over 20 years, and take joy at seeing first-timers realize that they are actually going to be able to watch the shows live right in front of their own eyes.  Those are the moments that make me love Eurovision the most (and the reasons I need to renew my membership with OGAE upon hitting “Publish”!).

What do YOU think? Is Zack just drinking the Kool-Aid or does OGAE really matter?  Let us know in the forum!