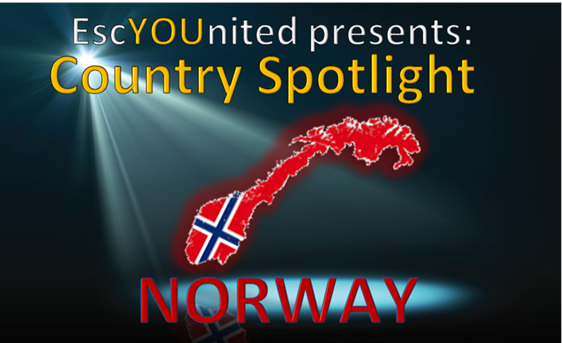 The Eurovision deck is constantly reshuffling itself, but if there’s something most fans and analysts seem to agree on is that Norway is experiencing a certain surge. My best friends (and fellow Eurofanboys) are convinced Norway are going to win very, very soon. However, is it too premature to draw such a conclusion, or is a fourth Norwegian  victory written in the aurora borealias? Whichever the case, we’re dusting off the old walking sticks and filling our bellies with en god stekt pizza, because we are headed towards a place where:

THE NORTHERN LIGHTS ARE DANCING

I am a bit hesitant to dump my support tokens into Norway’s basket – especially now that I’ve cursed the Czech Republic by claiming they could win, WHOOPS – but yes. Norway’s winning chances are perhaps not as high than those of Sweden, Italy, Russia or Ukraine, but these countries are permanent threats who are always in contention for the top five, if not the win.

However, as far as dark horse contenders go, Norway  they are very much up there. Have been for a while, In fact.

However, I don’t think we should surrender ourselves to recency bias – even though their most recent entry was phenomenal, if nothing else. Definitely the most Norwegian thing spawned in the Euroverse since ‘En God Stekt Pizza‘. I’ve always been a vocal KEiiNO supporter and it was a blast seeing them hijack the televote on the back of a Right Yoiking Fred. Too sexy for his gákti, so sexy it HURTS.

More importantly however, is that KEiiNO were one of those Eye-Opener entries, ensuring most fans – hardcore or casual – will be looking at Norway’s upcoming entry with a healthy amount of curiosity.

While it certainly feels like a given that a scandi will win Eurovision very soon, it begs the ever-controversial question: why would Norway win over Sweden? After all, Sweden have won ESC 6 times, have reached the top five 8 times in the past 10 years and nearly every relevant songwriter of present day pop music either is Swedish or has worked there. Sweden are always in contention for the win, period.

The answer is simple: Overdog Syndrome. There is much to discuss w/r/t Sweden (enough for a separate editorial), but their main issue is that the audience generally root for the underdog and Sweden is the furthest away from ‘underdog’ one can get. Sweden have only won in mediocre years where their clear dominance proved irresistible (1974, 1984, 1999, 2012) or in strong years without a clear likable frontrunner, where they surprised everyone with a killer performance (1991, 2015). Sweden, more than any other country, need to maintain a qualitative edge over their fellow competitors to remain in the good graces of the capricious general voting public. In sum, Sweden’s reputation of being ‘unbeatable’ ironically makes them very beatable.

With Norway however, I see no logical refutation to why they couldn’t win. The Norwegian entries may lack the stellar production value of their scandi neighbour Sweden, but retain enough quality control to receive a decent chunk of jury votes on the regular. There’s a lot of generic trash floating around every scandi selection, but unlike in Mello (generic) or DMGP (trash), these entries very rarely win in Melodi Gran Prix. Regardless of whether the Norwegian entries are subjectively good or bad, they are always interesting and different. While I’m hesitant to label the Norwegians as “indie“, especially with countries such as Slovenia, Ukraine and Portugal on the prowl, but their entries possess enough quirky characteristics to not merit a ‘Sweden clone’ label.

Norway’s quirks don’t always pay dividents. Agnete’s “two songs in one” approach fell flat (in part because of a throat infection, but mostly because aggressive key changes take more time to adjust to than a casual viewer would have been willing to spare), while Alexander Rybak made an utter fool of himself in Lisbon by reducing the art of music to a two-sentence nursery rhyme, plummeting from winning a weaksauce semifinal to a hilariously low 15th place in the Grand Final. Meanwhile, KEiiNO, JOWST, Margaret Berger, Rybak 1.0 and Carl Espen are all examples of recent Norwegian hits that retain a pleasant balance between immersion, fun and “Objectively Good Music”.

So, after KEiiNOwnage hit the euroscape like a neutron bomb, a potential for winning momentum has been set and all Norway have left to do is to cash in. They have 40 rivals for the trophy, can they beat all of them? Well, my magic 8-ball take on that would be… maybe?

Even though it feels like a Norwegian victory in the next five years is a given, I’m a bit perplexed by the new rules NRK have set for their national final. Don’t get me wrong, I condone that Norway are expanding their selection and show willingness to elevate MGP’s prestige. The new guidelines just appear a bit… convoluted. There are five semifinals, in which one song will qualify via the televote, but at the same time, they are five auto-qualifiers decided via a jury. Plus the audience has a 100% say in who goes to Rotterdam out of these 10 finalists?

…don’t know how to break this to you, Norway, but…

… one of the televote qualifiers will just outright win?

It’s at least somewhat baffling to me why Norway would choose to relegate they alleged 5 ‘best’ entries to a glorified Big Five Status in their own national final, unless all five of them are D*Sound-like unicorns with no chance in the televote (Good, I’ve praised D*Sound. Sean will be pleased with me now :wipes away sweat drop:). It won’t matter that all the auto-qualifiers get to perform in their allocated semi. If these entries can only be voted for once (in the final), they will cultivate a lower degree of emotional attachment with the audience than the televote qualifiers will.

It’s not necessarily a red flag in my eyes because soft rigging and careful entry selection can work miracles, but Norway have to be careful not to get carried away by the same quirks that have made them beloved by many fans. Giving the audience 100% ownership over who goes to Rotterdam is great – Televote Darlings trump Jury Pets in most cases. However, I have a few concerns: KEiiNO did poorly with the juries and this new system offers no guarantee that history won’t be repeating itself. Nobody mourned KEiiNO’s loss because nobody expected “Spirwhil” to win the televote, but Rotterdam will be a different beast entirely. Whether they like it or not, Norway are a possible contender for the gold. If their upcoming entry were to share a similar fate to KEiiNO, it would be a bitter disappointment for everybody involved.

All in all, we should keep our fingers crossed that NRK know what they’re doing. I have mild confidence they do – Norway have a knack for making the most of their entries and doing better than expected. If they remain focused and level-headed, we might indeed be dancing under an aurora-lit sky in 2022.

Next up: Since JESC ended, perhaps its time to disect the success story of the most recent winner and whether they can turn it into an adult esc success as well: Poland.

Happy April Fools Day everyone! tonight I will be breaking my analytical silence to dissec…