Home 2021 BREAKING: EBU rules out scenario A, focus on scenario B with possible downscaling 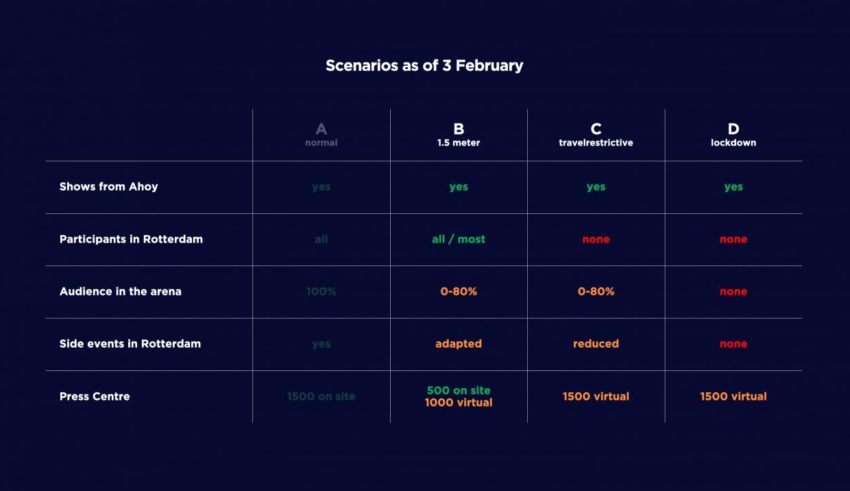 With the pandemic still raging across all Europe, the EBU needed to make a decision concerning the organization of the upcoming Eurovision Song Contest. The 65th contest, set to be held in Rotterdam, the Netherlands, will be aired on the week of the 17th of May.

Earlier, the EBU had issued four possible scenario’s underwhich the contest could take place. This afternoon, they confirmed that Scenario A ( defined as ‘the contest as we know it’), has been formally ruled out. Given the recent rioting in several Dutch cities due to the newest coronavirus restrictions, this is hardly a surprise.

Official Statements by the EBU

Martin Österdahl, Executive Suprevisor of the contest for the EBU issued the following statement:

“The Eurovision Song Contest will definitely make its welcome return this May despite the pandemic but, in the prevailing circumstances, it is regrettably impossible to hold the event in the way we are used to. […] We’re grateful for the renewed commitment and backing from the City of Rotterdam and the ongoing support of all the participating broadcasters. We very much hope to be able to gather in Rotterdam in May and will do all we can in the coming weeks to achieve this. With an ever-changing situation we are taking our time to ensure that we can host the Eurovision Song Contest in the best and safest way possible.”

More importantly, Österdahl revealed the EBU executives had revised the previous scenarios of B, C and D to better suit the current situation:

“The security, health and safety of all participants at the Eurovision Song Contest, from the crew to the artists, is our top priority. We are following international developments closely and continuing to explore and plan for 3 revised scenarios (B, C and D) first announced last autumn.”

The most important difference between the earlier scenario B and the revised one is the audience – Depending on how well the vaccination campaigns go, the AHOY arena can be filled up to 80% of its usual capacity under the best possible circumstances. Conversely, it can remain empty under all three remaining scenarios, should  the situation remain precarious.

Executive Producer to the Contest, Sietse Bakker underlined the importance of ‘getting the 41 artists to Rotterdam, having them all perform on the same stage and welcoming journalists to the contest‘, meaning that they’re working on making Scenario B the primary goal.

The official decision can be expected around Mid-April. Around this time, the stage will have been built, but participants will not yet have flown out to Rotterdam for rehearsals. Depending on how well, or how poorly, the figures go, Scenario B can easily be downscaled to Scenario’s C and D, if need be.

For those who already bought their ticket: The organizers have pledged to refund all current ticket holders this month and give them the option to buy new tickets for the same live show(s).

For a more in-depth explanation of Scenarios B, C and D, as well as the official EBU statements, this link will take you to the official website.