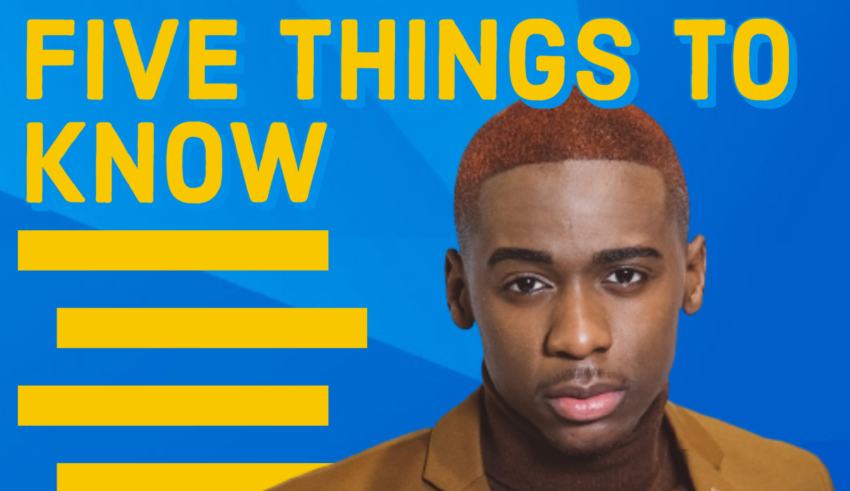 As previously reported, 21-year-old Jérémie Makiese will be representing Belgium at Eurovision 2022. Now that the dust has settled, here are five facts about Jérémie to help us get to know him a little better:

Of the 67 singers who auditioned for season 9 of The Voice Belgique, Jérémie was one of only eight performers to receive a four-chair turn, meaning all four of the season’s coaches wanted him on their team. He ultimately chose to join the team of BJ Scott, an American-born blues rock musician who co-wrote Belgium’s 2015 Eurovision entry, ‘Rhythm Inside’.

Jérémie was not an immediate frontrunner on the season. For several weeks, he was saved from elimination by his coach. By the end of the season, however, he won with 53% of the vote. Could Jérémie’s coach co-write a hit for him like she did in 2015? Loïc Nottet, now a fellow coach on the The Voice Belgique, was also on her team the year before he took part in Eurovision.

He’s an athlete with a comeback story

Less than a week before Jérémie was confirmed as the country’s official Eurovision entrant, he announced on Instagram that he had signed a one-year contract as a reserve goal keeper with the Royal Excelsior Virton, a Division B football club in Belgium.

His professional football journey has not been easy. He first joined a youth football club at age 13, against his father’s wishes. His father’s fear of sport injuries proved to be correct when, in 2019, Jérémie sustained a dislocated elbow while goalkeeping. He has since been training, getting back into pre-injury shape at a football academy. He’s definitely tough enough to handle the rigors of Eurovision season!

He has a wide variety of influences

Born in Antwerp, Belgium, to Congolese immigrants, Jérémie spent the early years of his life moving to different parts the country with his family, eventually settling in a bilingual municipality in Brussels. Raised by African immigrants and fluent in both French and Dutch, it’s no wonder Jérémie’s musical influences run the gamut from American soul singer Otis Redding to Belgian-Congolese hip hop artist Damso. The cultural fusion of his upbringing could produce a very interesting sound in his Eurovision entry.

He comes from a musical family

Jérémie is not the only singer in the family! Jérémie and his siblings have a long history of performing (predominately) Christian gospel music together. In this clip from 2016, the brothers show off their impressive harmonies.

They are singing in Lingala, a creole language spoken in parts of Central Africa. Could Jérémie’s Eurovision entry be fully or partially sang in Lingala as a tribute to his Congolese heritage? It’s too early to tell, but the possibility is exciting.

He always knows what time it is

Jérémie is listed on Instagram as an ambassador for Gregoreuo, a designer watch brand. Based in Dilbeek, Belgium, the business was recently founded by his two older brothers, Henoc and Ruben. One lucky customer got an extra surprise in May when their watch was hand delivered by Ruben and Jérémie, fresh off of Jérémie’s The Voice Belgique victory.

We may not have information about Belgium’s song for Eurovision 2022 yet, but we can be sure that Jérémie’s watch game will be ON POINT.

Are #YOU excited about Belgium’s choice in singer? Are #YOU already nervous about how they will stage his performance? Sound off in the comments below, in our forum, or on social media @ESCUnited.