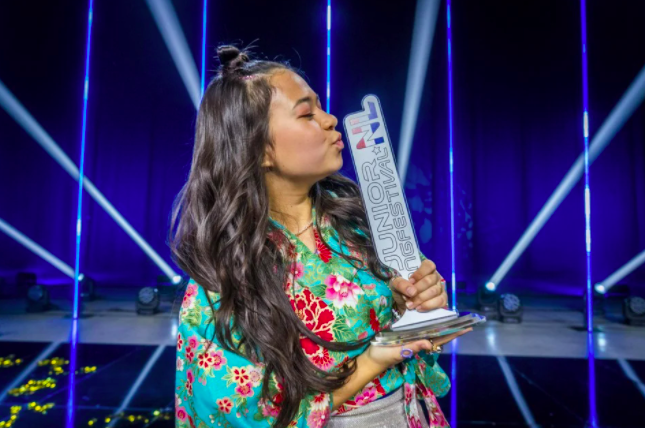 After months of preparation, the four finalist of Junior Songfestival performed in a full Ahoy Rotterdam to determine who will represent The Netherlands at Junior Eurovision in Paris. At the end of the show, presenter Romy Monteiro and Buddy Vedder announced that the 14-year-old Ayana was the winner of Junior Songfestival 2021. With her song Mata Sugu Aö Ne (When I See You Again) she convinced the professional jury, children’s jury and the viewers at home.

The professional jury, consisting of Emma Heesters, Jeangu Macrooy and Rolf Sanchez, had the difficult task of judging the finalists. Thankfully they got help from the children’s jury (existed out last year’s participant Unity, Jackie & Janae and Robin) and the viewers at home. In the end, this was the result of show:

Ayana’ song is about missing someone special who is far away. She sings that she could fly away to be with that person. The professional jury was impressed by her perfomance and said: ”What a voice! This was so good, so steady. We felt your pain and that you miss your family, very moving. It really came in. Very well done! ”

Ayana lives in Bussum. She’s born in the Netherlands, but her parents are British and Japanese. For 4 years, she was part of the biggest dutch children choir Kinderen voor Kinderen. Ayana is very excited about the win and said after accepting the trophy:” I want to thank you all. Lots of love. I love you !” In the next months, she will be preparing her performance for the big stage in Paris on the 19th of December.

The Netherlands have participated in every Junior Eurovision since the very first one in 2003. Girl group Unity represented The Netherlands last year with their song “Best Friends.”  The song finished in 4th place with a total of 132 points.

Do #YOU think The Netherlands has what it takes to win JESC this year? Share your thoughts with us on our forum HERE or join the discussion below in the comments and on social media!