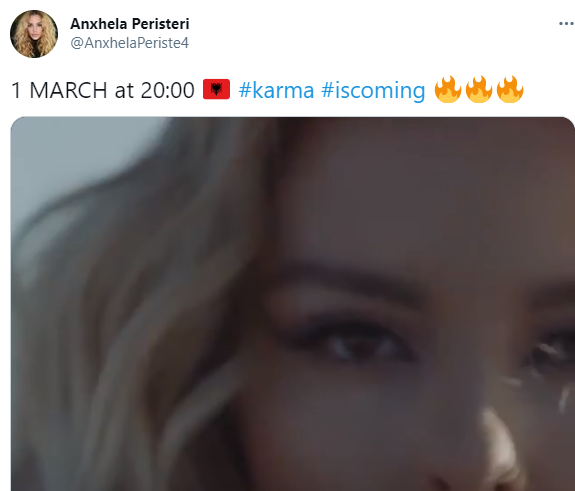 Albanian entrant Anxhela Peristeri has just officially revealed via a tweet that the Eurovision version of her song, ‘Karma’, will be premiered tonight on Albania’s broadcasting channel RTSH1, at 20:00 CET. Presumably, the channel will simply air the video clip, as opposed to dedicating a full show to the song.

There is currently no information on when the official youtube channel will upload the music video. So, for those interested in tuning in, here’s a link to the RTSH-1 feed: https://tv.rtsh.al/kanalet/rtsh-1.

Albania needed to revamp ‘Karma’ as the song was too long in its current FiK form. (as you presumably know, Eurovision songs cannot be longer than three minutes exactly.) Earlier, Anxhela had revealed that the song will remain in Albanian and that only minor changes would be made to the composition.

If you want a reminder of what ‘Karma’ sounded like originally, we have embedded a video below for your convenience

Albania are set to perform in the second half of the second semifinal, which will be aired on the 20th of May 2021. The last two times Albania had sent a song in their native language, in 2018 and 2019, they qualified for the Grand Final.

Feel free to join the Albania discussion in the comments, on Social Media or on our forum HERE.