Home 2020 A piece on Andorra’s potential return to Eurovision… 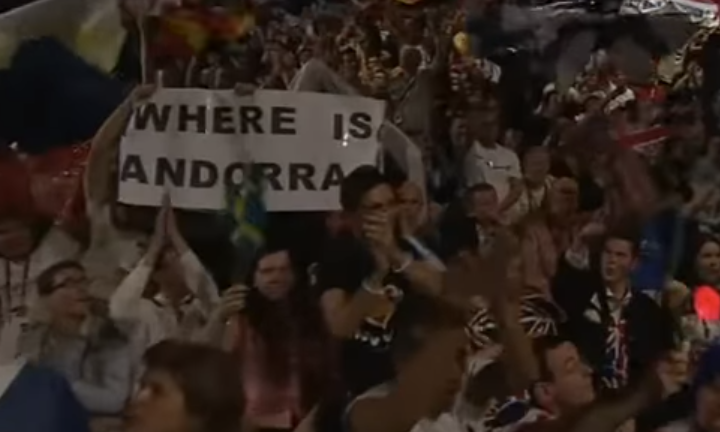 Fresh from the press: Our colleagues at Eurovoix have reported that Andorra have made plans to return to the contest. What does this mean? Will we see Andorra back at Eurovision?

Well, no. Not quite yet. Andorra won’t be participating in Rotterdam. The Pyrenean microstate withdrew in 2010 due to financial matters and will be continuing their absence for at least one more year.

What is new however, are certain news reports in the Catalan press which appear to indicate that RTVA may have expressed an interest in returning to the contest and are currently re-evaluating their budget, to see whether they can afford participation or not. If this financial redistribution were to be accepted by RTVA’s executive panel, then (and only then) could an Andorran return become reality.

However, these reports all come from external sources, while RTVA themselves remain tight-lipped.

So, listen very carefully because like Kirsten Cooke I will say this only once: At this very moment there is no confirmation whatsoever that Andorra will be returning to the contest.

It would be speculative to assume whether Andorra have experienced this apparent change of heart –  Andorran delegates have stated a return is impossible without government support. However, the ruling governmental parties have expressed a desire to return to increase Andorra’s international profile and stimulate tourism, taking away the main condition for Andorra’s continued absence. This could indeed indicate a potential return in the near future.

Should their return come to fruition, it would certainly be a welcome one. Andorra have the dubious honour of being the only participating country to have never reached a Eurovision Grand Final. Along with Slovakia and Monaco, they have never qualified from a semifinal before, however they came very close in 2007 with “Salvem él mon” by the indie rock band Anonymous.

However, the last two years having shown that pretty much anything is possible and nobody is safe. Persistent front-runners Russia and Azerbaijan have faced elimination while tiny San Marino raked in an impressive 10th place in a Grand Final televote. With a playing field which is much more even than the one in 2009, Andorra could snag an occasional qualification, or perhaps even better?

As long as RTVA refuse to confirm or deny these rumours however, a possible return remains one giant question mark.

Would #YOU welcome a return to the contest from Andorra? Share your thoughts with us on our forum HERE or join the discussion below and on social media!

Slovenia: Ana Soklič bests Lina Kuduzović in the superfinal, and flies to Rotterdam with “Voda”.