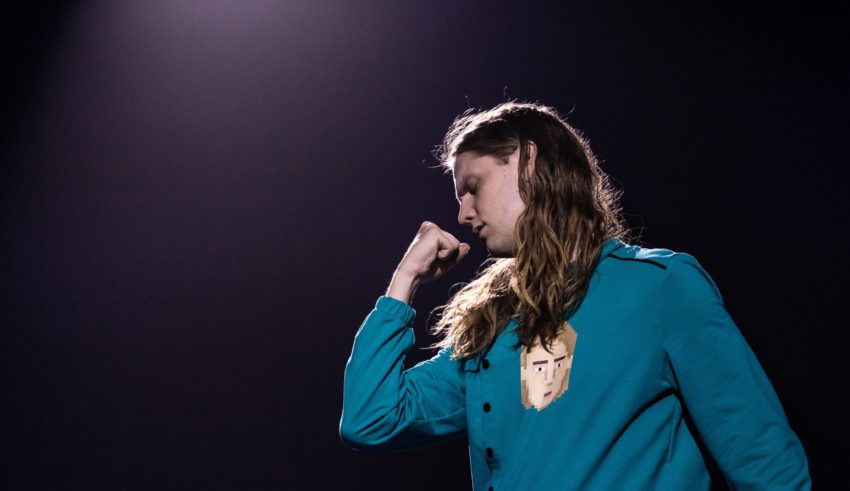 Regardless of whether or not the group gets to go to Eurovision 2021, they can always say that one of Australia’s biggest exports helped spread their 2020 entry across the globe to achieve cult status.

A song it is, and this article is a list of songs with “thing” in the title that made it to Eurovision. Okay, it’s not the most inspired article but hey, these are tough times, and a list such as this is appropriate for the song that inspired it. Songwriter and lead singer Daði Freyr said that “Think About Things” is about his daughter, born in April 2019, and wondering about the all the things she’d be thinking about and trying to process during her early days of life.

So read this list with the wonder of a newborn. Or else I will have Daði Freyr’s newest fan come around to your house and whip you into shape.

Personally, I find “Say Wonderful Things” the more interesting of the two as it hints at darker material underneath his nominally sweet expression of love to the object of his affection. She is apparently resistant to his overtures, but he assures her that her love for him will match his love for her in time. Okay, dark is perhaps too strong a word, but the lyrics do seem to be a shot across the bow of Caroll’s contemporaries who sing sweet nothings as almost an act of desperation for comfort from a dark and dreary post-WW2 landscape and a nation still struggling to cope with its downgrade from imperial power to European also-ran.

Or you could not be a psycho and just take the sweet lyrics at face value. Either way, this is a reminder of the sort of magic the United Kingdom could come up with when bothered to try and be competitive at this concert.

The Cockney Como’s appearance at Eurovision was a sign that the BBC meant business. Matt Monro is arguably one of the biggest names ever sent by the United Kingdom to Eurovision, having just come off a blockbuster hit “From Russia With Love” for the second James Bond movie.

A pity the live televised performance of Eurovision 1964 did not survive, though “I love the little things” lost to a (then) unknown Italian teenager. “I Love the Little Things” fits right in with Monro’s giant catalog of hits, and I would argue is the best of the United Kingdom’s 15 2nd place finishes.

About the lyrics, this carries on Carroll’s theme of saying “wonderful things,” though Monro’s also plays a little trick for the playboy cad he is – the “little things” he loves about the object of his affection are specific enough for someone to find flattering, but generic enough that they can’t pinned down on a particular woman he’s singing to. Though to be fair, getting too specific by singing things like “I love the way you $%#&# my $#%^@ behind the bins at the Brighouse Sainsbury’s” would be weirder.

For any fan worried about the 1960s counter-culture and rock music branching out into mind-blowing spectacles such as Jimi Hendrix, Black Sabbath and Led Zeppelin and creeping into Eurovision were comforted by perhaps the sweetest and most twee song ever committed to record in 1970. In troubled times and tensions rising between Ireland and the United Kingdom, it is perhaps no surprise Eurovision awarded Dana’s list of things she sees that remind her of her boo the win in 1970.

It also quite possibly the sweetest song of the 1970s (maybe “The Rainbow Connection” from 1979’s The Muppet Movie is the only song that could top it?), and hit Number 1 in several countries, most likely driven by both its sweet lullaby nature and that Dana, a singer from Northern Ireland representing the Republic of Ireland, represented a positive political act of hope for peace in the region.

It would take until the flushing of the native language rule before we had another English title with some variation of “thing” in the title. And lyrically, it doesn’t depart too much from the content of the other songs listed thus far. However, unlike the other three, “Everything I Want” came in 11th out of 24, which is still a credible left side of the board finish.

Pisarović wrote “In the Disco” for Bosnia and Herzegovina’s Deen at Eurovision 2004, and she remains active today, winning several awards for her 2019 jazz album “Petit Standard.”

We take a twist on the lyrics here, as “Everything” appears to sound like a break-up song (“I can feel my life ending as I whisper goodbye.”). This one is about “everything” she hates about her ex, and despite that she still loves and yearns for him.

“Everything” is the second of Greek-Cypriot hit machine Vissi’s three Eurovision appearances (she also represented Greece in 1980 and Cyprus in 2008). After Greece’s victory in 2005, Vissi came in 9th with this bombastic pop rock ballad “Everything” for the hosts. If you like a diva who delivers with power, “Everything” is for you. Vissi deserves her place as one of Eurovision’s greatest divas on the strength of this song’s finale alone.

“Something” is certainly the goofiest song so far. That is a deliberate choice as Andrius is telling the object of his affection that his love for her is making him fall apart. Andrius himself sells it with his disheveled appearance and his faux-nervous energy performance.

I suspect being subtle with that point meant a lot of fans didn’t get what he was going for. “Something” scraped into the Grand Final and finished in 22nd. I feel that is a little harsh. If I was to describe this in one word, I’d use “charming.”

From “Something” to “Something better,” we get Softengine and their adult indie-rock ala Coldplay entry for Finland which finished in 11th place.

This was a change in direction for Finland, and it almost worked. “Something better” does have its fans, with the lyrics, though nominally on the negative side, indicating the singer moving on from a bad relationship to a new one and resisting the temptation to go back to his old one.

Dad joke alert: Finland did not find “Something better” to represent them at Eurovision. Finland’s only qualifier for the final since scraped to 25th (though “Monsters” has developed a cult following that guarantees Saara Aalto fan favorite status for decades to come despite that placing).

After sweet declarations of love and a couple break-ups, “Wars for Nothing” steers our Thing based list right into depression. This acoustic guitar entreaty for peace remains a divisive entry (my “favorite” conspiracy theory about this was that its placement before Nina Sublatti’s “Warrior” in the Grand Final was a Russian ploy to deflate the number of votes for Georgia, because apparently Eurovision fans would not vote for a song called “Warrior” directly after a song about war that contains lyrics about “children joining the stars”).

In any event, “Wars for Nothing” finished 20th. Online debate about this song remains toxic because of the politics involved (a lot of attention was being paid at the time of the song’s release to the refugee crisis created by the Syrian War, and criticism of European leaders such as Victor Orban trying their best to keep them out and others being in denial about it).

I will say, from an aesthetic point of view, the tree of machine guns imagery in the live performance was pretty slick.

We’re back to relationships and such, though Greek-Cypriot John Karayiannis’s adult contemporary acoustic ballad is of the break-up flavor. This one takes a different, and more admirable, turn than most we hear at Eurovision or national finals – Karayiannis admits it’s his fault. The “one thing” is that he was not there at her (unspecified) moment of need.

I suspect based on his placing 22nd that Eurovision fans thought that “one thing” was him cheating or not being at the hospital after a serious injury, rather than being 15 minutes to pick her up for dinner.

I also think the song should have been called “Everything for you,” as the lyrics transition from him declaring he would do everything and then finding out that he didn’t.

Our only non-qualifier with “thing” in the title. This industrial rock entry by Highway came in 13th at Semi-Final 1, guaranteeing no place in the Grand Final at Eurovision 2016.

The lyrics are a bit dodgy with the vocalist wanting her to “take me a little closer inside you.” And if you have any idea what “speedy shadows” is a reference to (all I could find was a passage from Ralph Waldon Emerson from 1883), please let us know.

For Highway, I think you do have to give credit to Montenegro for going with something a little different. It’s easy to laugh at the bass drops at the bridge, but Montenegro can’t send Knez every year (as much as we’d love that).

Well we know Dolic would have qualified for the Eurovision 2020 Grand Final – “Violent Thing” is a Big Five entry. The ESC United team will soon reveal their opinions of this entry and the 40 others marooned in time. There will be arguments.

Which “thing” based song do #YOU enjoy? Do #YOU have a “thing” from a national selection or a non-English “thing” #YOU want to share? Let us know in the comments below, in our forum, or on social media.